On Saturday, May 28th, the First Nations House of Learning will host a graduation celebration event at the First Nations Longhouse in honour of participating Indigenous graduates from the Spring 2022 and Fall 2021 classes. The event will see Indigenous students walking through the Longhouse’s ceremonial door into Sty-Wet-Tan Great Hall, whereupon each will be […] 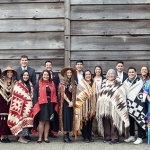 On Saturday, May 29, 2021, the First Nations House of Learning hosted a virtual graduation celebration to honour and recognize the educational achievements of participating Indigenous graduates from the UBC Vancouver campus. This virtual event was offered in place of the usual in-person celebration at the First Nations Longhouse, which will resume once COVID-19 restrictions […]

UBC marks a significant milestone in its commitment to truth and reconciliation with the launch of a new Indigenous Strategic Plan. Moreover, it is the first university in North America to commit to taking a human rights-based approach to its Indigenous strategic framework. 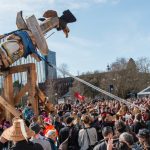 On Saturday, June 27, 2020, the First Nations House of Learning hosted a virtual graduation celebration to honour and recognize the educational achievements of participating Indigenous graduates. This year’s virtual offering replaced the usual in-person event held at the First Nations Longhouse, which wasn’t held due to restrictions related to the COVID-19 outbreak. Similar to […] 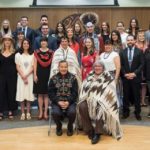 The flag of the Musqueam Indian Band was permanently raised on the University of British Columbia’s Vancouver campus today, thus formally signifying the university’s recognition of the Musqueam. 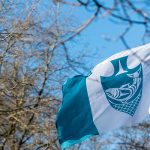 May 28, 2018 – On Saturday, May 26th, the First Nations House of Learning held its annual graduation celebration for participating Indigenous graduates at the UBC First Nations Longhouse (see video below). This year’s turnout was higher than most, with 58 of 211 eligible graduates celebrating, along with family, friends and supporters. The keynote was […] 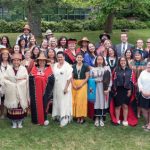 Musqueam street signs, created in partnership with the Musqueam First Nation, give both a bilingual experience while travelling on campus and acknowledge the linguistic heritage of the UBC Vancouver campus. The names do not refer to traditional sites but instead to UBC’s geography. 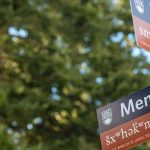 April 18, 2018 – Last week, on April 9th, more than 1000 people gathered inside and outside of a protective rain shelter to witness the opening of the Indian Residential School History and Dialogue Centre, which also included UBC President Santa J. Ono apologizing to survivors of Indian residential schools for the university’s involvement in […] 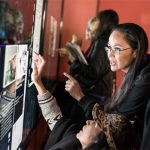 April 13, 2018 – A special screening of the feature film Indian Horse, an adaptation of Richard Wagamese’s award-winning novel, is being held at the UBC First Nations Longhouse on Tuesday, May 1st, at 7 PM. This dramatic film sheds light on a dark era when Canada’s Indian residential schools dominated the lives of Indigenous […] 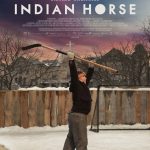