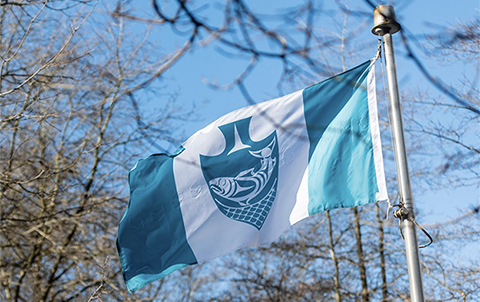 February 25, 2019 – The flag of the Musqueam Indian Band was permanently raised on the University of British Columbia’s Vancouver campus today, thus formally signifying the university’s recognition of the Musqueam in whose traditional, ancestral and unceded lands the university is located. It joins the provincial and UBC flags in the SUB North Plaza.

The morning ceremony, which was nicely graced with sunshine and a timely appearance of wind, was well-attended by over two hundred people from across campus, including members of the public and the Musqueam community. Speakers included Musqueam Chief Wayne Sparrow and UBC President and Vice-Chancellor, Professor Santa J. Ono. Remarks from Minister of Advanced Education, Skills and Training Melanie Mark, who couldn’t attend the event, were read out by Professor Sheryl Lightfoot, Senior Advisor to the President on Indigenous Affairs, who emceed the proceedings. 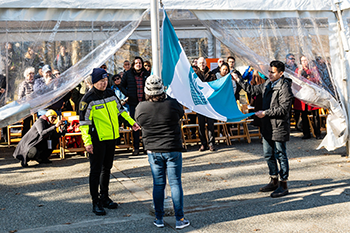 The flag was raised by UBC Musqueam students, Brett Sparrow and Grace Point.

“Today’s flag raising reflects our long-term commitment to the Musqueam Indian Band and our vision of solidarity moving forward,” said Professor Ono. “Musqueam people have inhabited the same territory for millennia. We are acknowledging this past history but we are also recognizing our present relationship with Musqueam and our responsibilities for future actions with Musqueam and other Indigenous communities in Canada and worldwide,” added Ono.

“The permanent installation of Musqueam’s flag is another important milestone in our relationship with UBC, who has been working hard to acknowledge that this is our traditional, ancestral and unceded territory,” said Musqueam Chief Wayne Sparrow. “The flag is a powerful visual reminder for students and visitors, and especially for our people, who I hope are reminded that this is their traditional homeland.”

The permanent Musqueam Indian Band flag adds to a growing Musqueam presence on campus. In April 2018, UBC unveiled new bilingual street signs that acknowledged the traditional territory of the Musqueam. The signs are now on nine major campus streets and supplement English names with names in hən̓q̓əmin̓əm̓, the traditional language of the Musqueam. A Musqueam welcome pole or qeqən, carved by Musqueam artist Brent Sparrow Jr., was dedicated in April 2016 to mark the hundred-year anniversary of UBC. It joined the House Post of qiyǝplenǝxʷ (Capilano), installed in 2012.

This is in addition to the Musqueam Language Program, a sequence of six UBC-accredited courses in hən̓q̓əmin̓əm̓ offered by the UBC First Nations & Endangered Languages Program and Musqueam community members, as well as the signing of a historic memorandum of affiliation (PDF) in 2006 that emphasized the importance of building a long-term relationship.

With files from University News

One response to “Musqueam flag raised at UBC”