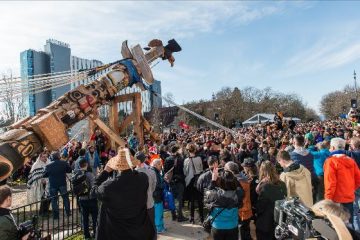 Today marks a significant milestone in UBC’s commitment to truth and reconciliation: the university will celebrate the launch of its new Indigenous Strategic Plan (ISP). This makes UBC the first university in North America to commit to taking a human rights-based approach to its Indigenous strategic framework. The plan represents a university-wide response to the United Nations Declaration on the Rights of Indigenous Peoples and the National Inquiry into Missing and Murdered Indigenous Women and Girls’ Calls for Justice. It also represents the UBC Vancouver campus’ response to the Truth and Reconciliation Commission’s Calls to Action.

The plan, intended as a guiding framework for faculties, units and portfolios across both campuses to develop their own plans, outlines eight goals and 43 actions the university will collectively take to advance its vision of UBC as a leading university globally in the implementation of Indigenous peoples’ human rights.

“The new Indigenous Strategic Plan acknowledges our responsibility toward the truth as an institution of knowledge and learning and how we need to collectively evolve to respond to the urgent need for meaningful reconciliation,” says Sheryl Lightfoot, plan co-lead and senior advisor to the president on Indigenous affairs at UBC and Canada research chair of global Indigenous rights and politics.

“Our expectation is that this plan moves beyond our UBC goals. We want it to demonstrate how public institutions, not just governments, can play a critical role in upholding, advancing and implementing the human rights standards set out in the UN Declaration, and inspire others to do the same.”

The ISP commits to reviewing university policies and practices to ensure they live up to the requirements of the Declaration and other human rights standards. As one aspect of this commitment, UBC will work with Indigenous communities and partners to co-develop research protocols consistent with the imperatives of free, prior and informed consent and ownership and control of Indigenous knowledge and information. Other intended impacts include:

“In light of current calls for deep social change in our societies, UBC must be a place that confers equal rights on all, without discrimination,” says Santa J. Ono, president and vice-chancellor, UBC.

“In order to do this, we must dismantle mechanisms of oppression that still exist in our systems and work together to build new structures that honour the human rights of everyone, equally. We must move beyond words and take meaningful action. As a centre of research and learning, as a university with campuses on Musqueam and Syilx territory, and as an institution of Canadian society, we understand that our responsibilities do not end with the courses we offer or the efforts we’ve undertaken to make the university more diverse and inclusive. Meaningful reconciliation requires more than this and we are prepared to do the hard work.”

The plan builds upon UBC’s first Aboriginal Strategic Plan that was launched in 2009. It was developed with the guidance of Indigenous Elders, leaders, and other experts, and through extensive dialogue with both Indigenous and non-Indigenous students, faculty, staff, and other members of the UBC community.

“We’ve come a long way over the past decade in particular but the consultation process highlighted the reality that there’s still a long road ahead in order for us to see Indigenous students, faculty, staff and partners not just survive but thrive,” says Margaret Moss, plan co-lead and director, First Nations House of Learning at UBC.

“We want to ensure our campuses are places where Indigenous students, scholars and knowledge keepers truly feel welcome and are able to reach their fullest potential. We want our campuses to prominently reflect and celebrate cultures and traditions of the Indigenous peoples on whose territories they are located.”

UBC Okanagan will celebrate the ISP framework later this fall alongside the first anniversary of the campus’ Truth and Reconciliation commitments. The campus shares the vision, mission and collective determination to impact meaningful change through the new framework.

“Seeing the university’s ISP launch today is an exciting next step as it allows us to continue to build upon the important work that has already been done, as well as continue in a direction of meaningful change and accountability.”

UBC, on both campuses, has long demonstrated a commitment to Indigenous engagement. In more recent years, UBC Vancouver campus initiatives have included the installation of a Musqueam welcome pole or qeqən, carved by Musqueam artist Brent Sparrow Jr. to mark the hundred-year anniversary of UBC, the installation of bilingual street signs that acknowledge the traditional territory of the Musqueam people, the raising of the Reconciliation Pole, and the permanent raising of the Musqueam flag. These efforts build upon earlier initiatives such as the introduction of the Musqueam 101 speaker series and hən̓q̓əmin̓əm̓ language classes. The UBC Okanagan campus has seen the permanent raising of the Okanagan Nation Alliance flag and the launch of its Declaration of Truth and Reconciliation Commitments. Both campuses have also signed memorandums of affiliation or understanding with Host Nations, emphasizing the importance of building long-term relationships. This has all been underpinned by the apology given by President Ono on behalf of UBC for its complicity in the history of residential schools, at the opening of the Indian Residential School History and Dialogue Centre, in April 2018.

Support for the new Indigenous Strategic Plan hails from beyond UBC’s campuses.

“With its new Indigenous Strategic Plan, the University of British Columbia has demonstrated some of the ways that the United Nations Declaration on the Rights of Indigenous Peoples has immediate, practical application in the lives of Canadians. No one should be waiting to implement the UN Declaration. We need to act today to put this crucial framework for reconciliation into practice. I honour the University and its partners, including the Musqueam people, for the leadership that has been shown,” says National Chief Perry Bellegarde, Assembly of First Nations.

“True reconciliation between Indigenous Peoples and Canadians will be an ongoing network of renewed relationships. Reconciliation requires all Canadian institutions to confront their roles in enduring systemic violations of Indigenous human rights throughout the country. In the Indigenous Strategic Plan, UBC commits to acknowledging this truth. The plan pledges to respect and uphold the rights and knowledge of First Nations, Inuit and Métis Peoples, including xʷməθkʷəy̓əm (Musqueam) peoples who are the traditional owners of the land where the Vancouver campus now stands. Musqueam looks forward to continuing to strengthen our relationship with UBC as we implement this new strategic plan together. This is just the beginning,” says Chief Wayne Sparrow (yək̓ʷyak̓ʷəl̕əq), Musqueam Indian Band.

“On November 26th, 2019, our government proudly enacted the B.C. Declaration on the Rights of Indigenous Peoples Act. The Act encourages all public institutions to implement articles of the UN Declaration on the Rights of Indigenous Peoples and calls to action of the Truth and Reconciliation Commission,” says Honourable Melanie Mark, minister of advanced education, skills and training. “It’s extremely encouraging to see UBC taking bold measures to address past and current systemic gaps within a human rights framework. This level of commitment is what’s needed to forge a positive path forward.”

Lightfoot admits the plan is ambitious in areas and that, overall, it will require everyone’s dedication and hard work, but she and others involved in the plan’s development are optimistic it will be fully realized over time.

“If we view this as a shared responsibility and truly embed the plan into the heart of our work, operations and culture, we will see the change we have been needing to see for a long time.”

UBC President Santa Ono is hosting a virtual event on Monday, September 14, from 1:00 p.m. – 2:30 p.m. to celebrate the Indigenous Strategic Plan at the Vancouver campus, located on the traditional, ancestral and unceded territories of the Musqueam. The celebration will feature guest speakers including Musqueam Elder Larry Grant, Indigenous leaders and human rights experts as well as a panel discussion with Indigenous staff, students and alumni. Learn more