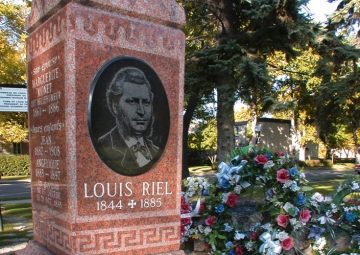 Today, November 16, 2020, is the 135th anniversary of the execution of famed Métis leader, Louis Riel. Thus, it is a day for sombre contemplation of the person, but more so the struggle he led to have Métis land rights, culture and autonomy formally recognized during Canada’s era of westward expansion.

Notably, on two occasions, Riel led the Métis charge against the Canadian government’s imperialism in the West. The first, the Red River Resistance of 1869, resulted in the founding of the Province of Manitoba, along with a tenuous response to Métis concerns. The second, the North-West Resistance of 1885, in a region that would eventually become part of the province of Saskatchewan, was a short-lived and more violent affair that ultimately cost him his life when he was executed later that same year.

This unsuccessful effort to gain a measure of autonomy for themselves would prove dire for the Métis, as both the state and white settlers treated them even more poorly afterward. Therefore, it is also a day to reflect on the contemporary struggle of the Métis, who continue to seek a meaningful place in the fabric of the country, in addition to equitable treatment as one of the three groups that make up the Aboriginal Peoples of Canada, along with the Inuit and First Nations.

But more than this, it is a good day for non-Métis to challenge themselves to open their minds, if not their hearts, and learn why the Métis are indeed a distinct people within federation. To do so would mean learning about their unique contribution to the story of Canada, starting with their historic role in the 250-year long fur-trade, the harbinger to the country’s establishment in 1867.

Learn also how along the way the Métis cultivated their own unique cultural expressions and language, each drawing from dissimilar strands to form yet another distinctive thread in the world’s rich tapestry of cultures, races and customs.

All of this and much more awaits those who want to learn the story of the Métis and their place in the chronicle of Canada.

In the context of UBC, it is worth noting that in 2019 many of the students who self-identified as Aboriginal at the Vancouver campus further self-identified as Métis. As well, the campus has a modest contingent of Métis faculty and staff. This too is something to reflect upon on Louis Riel Day.

Check out the following selection of UBC-affiliated resources to start learning more about the Métis.