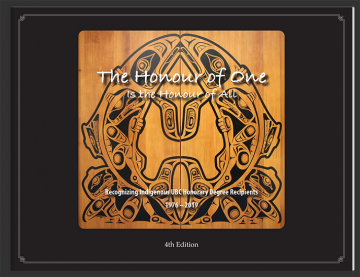 In honour of this year’s National Indigenous Peoples Day on June 21st and in anticipation of the upcoming virtual Indigenous graduation celebration on June 27th, the First Nations House of Learning is pleased to release The Honour of One is the Honour of All, a virtual sourcebook produced in tribute to the Indigenous individuals who over the years have received an honorary degree from the University of British Columbia, Vancouver.

Starting with Haida artist, Bill Reid, who UBC honoured with a Doctor of Laws, honoris causa, in 1976, to the most recent, Musqueam’s Leona Sparrow in 2019, the book celebrates each of the 29 recipients by reprinting a photograph of them along with their respective citations, which were read aloud as they received their degree.

The book also provides a listing to more sources of information on each of recipients, including in most cases links to online videos of them. This was done in order to present them beyond mere still images and text.

“On behalf of the university, I am pleased to offer this virtual book to the UBC community and the public at large, but most especially to Indigenous communities across the country, so that everyone can learn about these inspiring individuals and their vital contributions to their communities, as well as the overall life of Canada,” said Dr. Margaret Moss, director of the First Nations House of Learning.

“It’s clear from each of their citations why they were recognized by the university, and it’s also clear why each of them continue to inspire and guide others through their stories of service to Indigenous communities and beyond,” she added.

Dr. Moss notes the tradition of having recipients provide the keynote address at the university’s graduation celebration for Indigenous graduates, hosted by the First Nations House of Learning, whenever possible.

“It’s of great benefit to have the recipients share their wisdom and encouragement with the graduates, given as they are often at the beginning of their working lives. Their words can bring clarity to the hope they seek as well as guidance.”

Adina Williams of the Squamish Nation, in her then role as a work learn student, researched and compiled information on each of the recipients for the book.

“It’s so important that their work and extensive leadership continue to be recognized, and I hope through this project that they are acknowledged more widely,” she added.