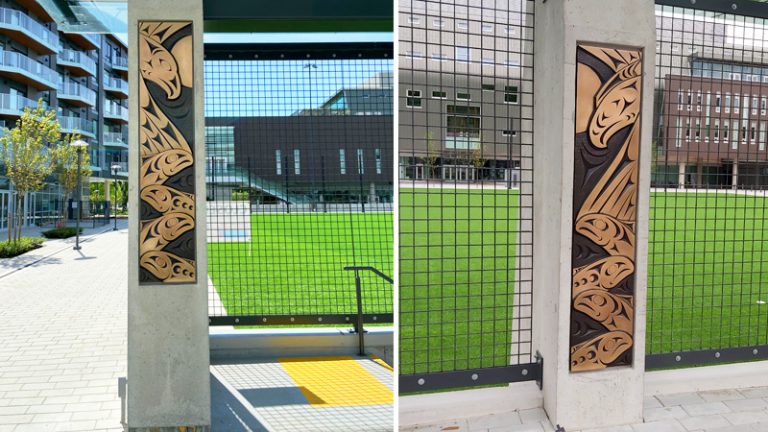 ʔəlqsən is the hən̓q̓əmin̓əm̓ word for ‘point of land’, “Point Grey” is the English designation for a major point of land within Musqueam territory where many Musqueam village sites are and that include some major villages such as xʷməθkʷəy̓əm and ʔəy̓alməxʷ.

Sparrow created two different wood carvings featuring images of eagles, thunderbirds and salmon which were then cast in bronze.

A community-based selection panel comprised of three Musqueam community members, including a UBC student, and a faculty member from the Museum of Anthropology chose Sparrow’s design.

The installation enhances the arrival experience to UBC, brings cohesion and vibrancy to this highly public space, and informs those arriving to campus that UBC is on the traditional, unceded and ancestral territory of the Musqueam people.

The following artist’s statement provides insight on the significance of the artwork to both the artist and the Musqueam community.

We greet all of you who have come here to the University of British Columbia, Vancouver Campus. This campus is located within the traditional, ancestral and unceded lands of the hən̓q̓əmin̓əm̓-speaking Musqueam people.

I was born in 1970 and am a member of the Musqueam First Nation. I trained as a welder, but apprenticed and carved alongside my mother, master carver Susan A. Point, and master carver, John Livingston. My mother instilled an awareness and knowledge of my Central Coast Salish Musqueam culture in me. This alone created an inspiration and learning experience she and I share.

I continue to explore and expand the possibilities of presenting my heritage and Central Coast Salish art form, paying tribute to my Musqueam heritage. I have created several original designs in my own unique style and as a young artist I am committed to both contributing to my culture while raising its public profile.

Art & Culture, the record of all human history; a tradition showcased at UBC. The Musqueam gathering place that originally sat on the plateau away from the bluffs is no different from the present-day community, a central hub that most paths led to and away from. ʔəlqsən (Point Grey) is known to my ancestors as the Battleground of the West Wind, a natural landmark dividing the Fraser River estuary from Burrard Inlet; the winds sweeping in often send rain clouds to the north and clear skies south.

The Peninsula has been a sentry point for thousands of years. From q̓ələχən, the fort and lookout for our warriors on the point, trails for our runners radiated out. The importance of the the Point Grey peninsula for defense has continued for the newcomers up to the Second World War. 70 years-on it has become a welcoming gateway, a beacon of positivity for students and people from around the globe. 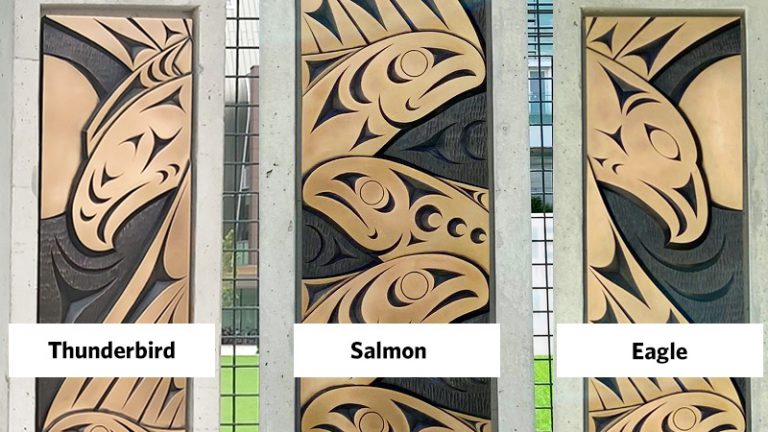 These vertical and linear pieces symbolize many paths, many directions, many journeys. Paths used for thousands of years by Musqueam peoples, are still in use today by many thousands of people. This place is a way of life.

As a Musqueam fisherman, I have seen many salmon transformations in the rivers since my childhood. In this piece, salmon are messengers carrying their own stories. They are being carried by the wings of these birds – both protected by the thunderbird and used by the eagle. This piece is a metaphor for the need for balance.

Eagles, salmon & thunderbirds, together, are uplifting and inspiring: symbols of protection and enlightenment.

I chose salmon for their resilience in weaving through Coast Salish culture and communities like the rivers themselves in which they return to spawn. Salmon tie together the web of life from coastal inlets and fjords as far inland as the Rocky Mountains: bringing rich proteins from the far North Pacific Ocean and these proteins are found in trees thousands of kilometers away. They truly are the sacred balance and in my artwork I hope to detail the significance of salmon by way of representing this cycle.

The imagery is full of symbolism, the bird images (Science and mythological– Eagles and Thunderbirds) that are on a journey, a story made up from simple Salmon eggs. It suggests that learners come to the university where they grow into messengers, seekers and travelers.

Thunderbird is a giant supernatural bird who causes thunder and lightning. Lightning flashes from his flapping wings and blinking his eyes. Thunderbird is a mountain dweller and is highly intelligent. From his home, he keeps a close eye over his dominion. Thunderbird preoccupies his time carrying out law and protocol and asserting justice to communities in need. Thunderbird is often shown with ears, showing supernatural powers. Thunderbirds are the protectors of the people and salmon, raising waters for returning salmon or carrying them to water where the people need them.

The Salmon symbolizes instinct, determination and persistence. Salmon is also a symbol of abundance, wealth and prosperity because the Salmon is the primary food source for the Musqueam. It is also symbolic of dependability and renewal representing the provider of life. Salmon in pairs are good luck because they represent regeneration, a new bounty and are symbols of wealth

Out of respect, ceremonies are often held to celebrate the return of the Salmon to their traditional spawning grounds. Which I am trying to convey in my artwork concept. The artwork will be a beacon while entering or exiting the campus via the gateway. People will walk back and forth along this route which I liken to Salmon making the journey from the spawning grounds to sea and back. A true connection to the four-year cycle of sockeye salmon and undergraduates.

The Eagle is a sacred, wise and noble creature representing power and prestige. Eagle feathers are given as symbolic gifts to impart respect for accomplishment and display of courage and wisdom. The Eagle can be identified by a powerful beak whose upper half ends in a strong downward curve with piercing eyes, feathers and large talons.
Learn more about Musqueam & UBC engagement initiatives.