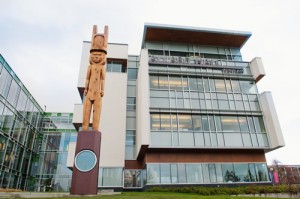 On March 20th, a group of about 70 faculty, staff, students, alumni, and friends gathered in front of Allard Hall for a ceremonial affair to honour the newly raised First Nations Musqueam house post. Musqueam artist, Brent Sparrow Jr. was commissioned to carve this house post which depicts the human figure of qiyəplenəxʷ (Capilano). A number of representatives from the university, law school, and Musqueam Nation spoke about what this house post meant to each of them.

The ceremony started with the Dean of the Faculty of Law, Mary Anne Bobinski, thanking those that came to celebrate the house post. She also thanked those that helped get this project off the ground and continued with it throughout the years. The carving indeed represents the commitment and dedication of those who worked on it, but as the ceremony made evident, it symbolizes much more.

In speaking of the prominently placed house post, the Honourable Stephen Owen, UBC’s Vice-President, External, Legal and Community Relations, said that there is “no better symbol of strength of relationship.” 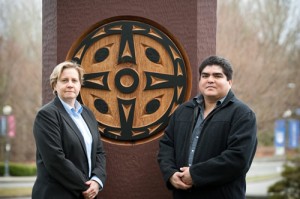 Dean Bobinski also remarked that the post celebrates the Musqueam leader, qiyəplenəxʷ. Although many people associate this name with the suspension bridge in North Vancouver, the Dean acknowledged that qiyəplenəxʷ “is widely recognized for leading the [Musqueam] people in defending their territory, laws, and customs.” In many ways this can be correlated with the types of work that students, faculty, and the Musqueam do today on this land when learning about and defending our legal values.

Cultural leader and band councilor, Howard Grant spoke on behalf of the artist, as is the practice with the Musqueam. Howard said that Brent was “honoured to carve this house post as a way of commemorating the institution and what they’re defending”. The land where UBC stands has long been known as a place of defense for the Musqueam. In the past, this area was a strategic fortification site, known as q’ələχən, where Musqueam warriors and their families resided to protect the land from marauders.

Howard Grant also expressed that Brent was thankful to the selection committee for choosing him to carve the house post as well as to those who were in attendance to witness the ceremony.

Musqueam Elder Larry Grant spoke in hən’q’əmin’əm’, a Coast Salish dialect, followed by an English translation. He welcomed the public to the traditional, ancestral, and unceded territory of the Musqueam people and highlighted that the Musqueam have never formally surrendered or given-up the territory upon which the university sits. 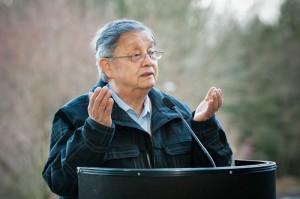 The house post may signify a reconciliatory relationship between the university and Aboriginal communities. As Dean Bobinkski explained in her speech, “The figure recognizes the historic and ongoing relationship between the UBC Faculty of Law and the Musqueam people in the pursuit of Aboriginal justice and education.” This sentiment was echoed by Musqueam Councilor Wade Grant, who asserted that, “This post is seen as one that recognizes Indigenous laws and reconciling things that should have been done many years ago.” Counselor Grant reflected on the history of First Nations people being excluded from voting and higher education, but noted, the Musqueam now play a more integral part at the University.

The ceremony also included a traditional Coast Salish blessing. Thelma Stogan, a respected member of the Musqueam Nation, blessed the post using cedar boughs. She asked all those in attendance to pray in their respective fashion while she went around the post brushing it with the cedar boughs. Cedar boughs play a significant role with many First Nations people along the Northwest Coast, such as the Musqueam, who use it to bless and cleanse spaces and people.

The ceremony lasted only an hour, but this house post will stand in front of the law school for a lifetime. It’s open to all those that look upon Allard Hall and see the house post and to reflect on what it means, and the people upon whose traditional territory it stands.