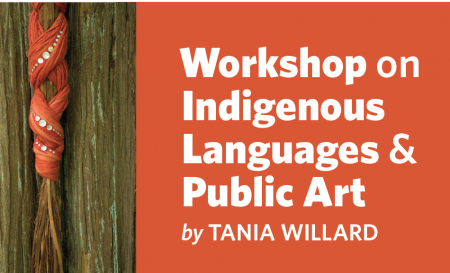 November 14, 2014 – You are invited to join artist Tania Willard in a discussion of her recent project Rule of the Trees a public art project for Translink. Participants will be invited to share in conversation/ideas and translations of words for land in indigenous and other languages of origin. The project conceptually links our contemporary migrations throughout the city with a memorial to the intricate root systems of old growth forests that would have stood in the city before the onset of colonization and industrialization. This project attempts to reconstruct a diverse set of knowledges in which natural systems are affected by us-how the land remembers us. Contributions in the form of text in ‘languages of origin’ will become part of the final artwork, scheduled for 2016 at Commercial Broadway new sky train platform.

Download the poster for more information, including Tania Willard’s bio.