UBC Lowers BC Flag in Remembrance of Alfred John Scow 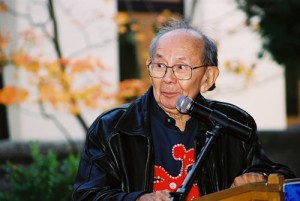 Judge Alfred Scow at the rededication of the Victory Through Honour Pole in October 2004.

The BC Flag (Main Mall and Agronomy Road) has been lowered today, Wednesday, March 6, in remembrance.

A memorial service will be held at Christ Church Cathedral, Vancouver, on Saturday, March 9th at 2:00 PM. There will also be a celebration of Alfred’s life in Sty-Wet-Tan, the Great Hall of the First Nations Longhouse, on Sunday, March 10th, 2013 at 2:00 P.M.