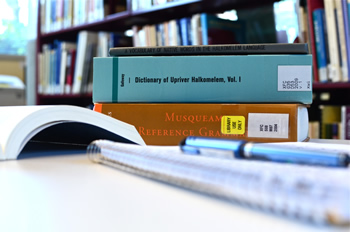 With over half of the Aboriginal Languages of Canada, BC has a rich and diverse linguistic heritage. Tragically, all of the 32 surviving First Nations languages in the province are critically endangered. Fluent speakers make up only 5.1% of the population and most of them are elders.

The University has included these languages to encourage more First Nations students to take courses in their own languages while tracking towards admission to the University.

Once students arrive at UBC they can continue to study some of these languages through the First Nations Languages Program.

The stabilization, documentation, and recovery of Aboriginal languages is often identified as critical by Aboriginal communities, and they are priorities that UBC has identified in its Aboriginal Strategic Plan. In the future, the University hopes to expand the breadth of language offerings and the number of First Nations languages on the lists of approved courses.