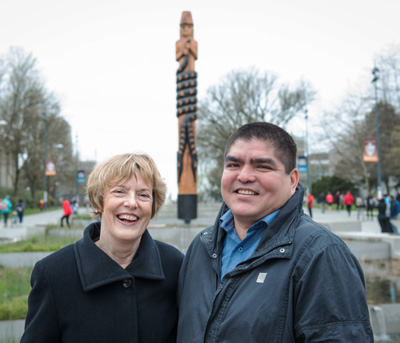 The Musqueam people and the University of British Columbia acknowledged their developing partnership on April 6th, 2016, with the dedication of a striking cedar post installed prominently on the Point Grey campus, which is located on the traditional, ancestral and unceded territory of the Musqueam people.

“We cherish the relationship between the university and the Musqueam,” said Musqueam Chief Wayne Sparrow. “As UBC is on our traditional territory, it’s important that we work together closely to share our culture and look for opportunities to work together.”

The new Musqueam post is now installed, facing east towards the new Robert H. Lee Alumni Centre and the campus entrance, at the foot of a cascading water feature at University Boulevard and East Mall.

“This beautiful post will serve as a permanent welcome to all visitors to these grounds and as a reminder of our relationship with the Musqueam people who were here long before UBC’s history began,” said Interim President Martha Piper. “Its dedication, one of the closing events of UBC’s Centennial year, points towards renewed—and stronger—relationships in the future.”

The land upon which UBC and the post are situated has always been a place of learning for the Musqueam people, where culture, history, and traditions have been passed from one generation to the next. 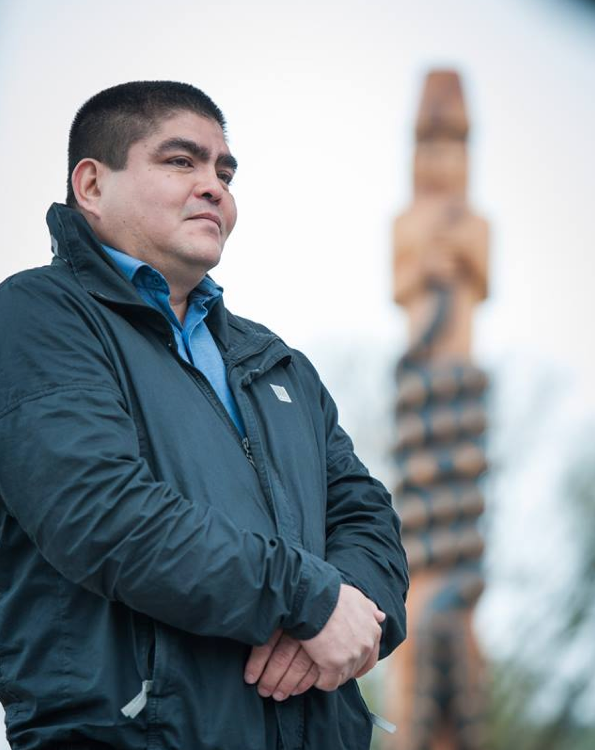 “This qeqən (post) tells the story of the origin of our name xʷməθkʷəy̓əm (Musqueam). The old people spoke of a small lake called xʷməm̓qʷe:m (Camosun Bog) where the sʔi:ɬqəy̓ (double-headed serpent) originated. They were warned as youth to be cautious and not go near or they would surely die. This sʔi:ɬqəy̓ was so massive its winding path from the lake to the stal̕əw̓ (river) became the creek flowing through Musqueam to this day. Everything the serpent passed over died and from its droppings bloomed a new plant, the məθkʷəy̓. For this reason the people of long ago named that place xʷməθkʷəy̓əm (Musqueam – place of the məθkʷəy̓)

This qeqən represents our xʷməθkʷəy̓əm (Musqueam) ancestors and our ongoing connection to them and this land through their teachings. The figure is holding the sʔi:ɬqəy̓’s tail to showcase this sχʷəy̓em̓’s (ancient history) passage through generations, relating how we became known as xʷməθkʷəy̓əm (Musqueam) people – People of the məθkʷəy̓ plant. The scalloping reflects the sʔi:ɬqəy̓’s path and trigons represent the unique məθkʷəy̓ plant. The sʔi:ɬqəy̓’s stomach is said to have been as big as a storage basket, designed here as an oval. I drew upon these traditional design elements to depict this rich history.”

1927: A pair of Musqueam house posts are presented to UBC.

1993: The First Nations Longhouse, built in consultation with Musqueam and many other Aboriginal groups, opens as a gathering place for Aboriginal students and a place of learning for people from the broader community.

2006: The University of British Columbia and the Musqueam Indian Band sign a historic memorandum of affiliation to further the sharing of knowledge and the advancement of Musqueam and Aboriginal youth and adults in post-secondary education.