Centre for Excellence in Indigenous Health

UBC’s Aboriginal Strategic Plan, established in 2009 as the first part of the University’s then strategic plan, Place and Promise, intended to find ways to better support current and emerging Aboriginal initiatives. In the past, Aboriginal programs were often marginalized. Thus, a primary goal of the UBC Aboriginal Strategic Plan was to ensure that Aboriginal programs were better integrated into core university functions and budgetary processes. The UBC Centre for Excellence in Indigenous Health proposal was in keeping with this goal. Subsequently, it officially opened on January 1, 2014. The Centre significantly improves UBC’s ability to contribute to Aboriginal health. 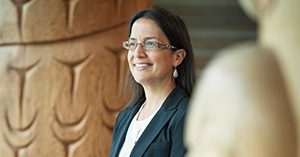 The idea to form the Centre began with a group of faculty and staff in the Faculty of Medicine, led by Dr Nadine Caron, the first Aboriginal woman to graduate with an MD from UBC. She is now a surgeon and Assistant Professor in UBC’s Northern Medical Program. Dr Caron has long been associated with the Johns Hopkins Center for American Indian Health, the most highly regarded Indigenous health program in the US, which was seen as a potential partner for a Centre here.

The group also included Professor Patricia Spittal, a researcher in public health, and Chief Wayne Christian of the Splatsin First Nation, who are the co-Principal Investigators for The Cedar Project, an important Aboriginal health initiative. In addition, there were two Aboriginal staff members in Medicine, Leah Walker, a curriculum developer with the Division of Aboriginal People’s Health in Family Practice, and James Andrew, the Aboriginal Student Initiatives Coordinator in the Faculty of Medicine. Finally, Professor Linc Kesler, then director of the First Nations House of Learning and Senior Advisor to the UBC President on Aboriginal Affairs,  provided support on the larger UBC Aboriginal strategy.

The proposal came out of the recognition that there were considerable gains to be made in education, support for Aboriginal students, and collaborative community-based research and services from a more integrated structure. A particular concern was the need to have an integrated point of contact between the Faculty of Medicine and the emerging First Nations Health Authority in BC. In its early days, there was a further urgency, as Aboriginal initiatives in Medicine were in a precarious state. The need for a better platform was clear.

As work progressed, a larger reorganization of the health disciplines at UBC began and the committee was directed to reframe the proposal to have a larger interdisciplinary reach. The committee was expanded to include representatives from more disciplines, among them Dr Lee Brown, then Director of the Institute for Aboriginal Health, and others with expertise in this field.

In meetings with faculties and units throughout the health disciplines the Centre proposal received a positive response, which confirmed it addressed a recognized need. In a wider set of consultations with the First Nations Health Authority and other Aboriginal organizations and communities, further support was expressed and useful suggestions for improvement were made. A web page (health.aboriginal.ubc.ca) with the text of the proposal and an opportunity for feedback was also established and widely publicized.

As the proposal began to move towards implementation, Dr Louise Nasmith, Principal of the  former College of Health Disciplines, in which the Institute for Aboriginal Health had been located, was identified as the administrative lead. In subsequent meetings, the proposal was supported by the Committee of Health Deans and central administration.

In time, it became clear that the Centre framework and its proposed location in the School of Public and Population Health provided a more sustainable platform for Aboriginal initiatives than they had in the past. This was major step forward.

As part of the transition to the Centre framework, considerable attention was given to the very valuable and tightly focused programs of the Institute for Aboriginal Health and their dedicated program staff. More stable and sustainable locations for their work were established.

The Centre proposal was approved by the UBC-Vancouver Faculty Senate on November 20, 2013, and by the Board of Governors a few days later. The Centre began operations on January 1, 2014.

Aboriginal initiatives across the university are expanding and very considerable attention has been directed to their sustainability and future growth. Aboriginal students are better supported than they ever have been. The cohort of Indigenous faculty across the university has more than doubled, and many valuable new initiatives have begun. The Centre will expand the university’s capacity to respond to community health concerns, provide educational opportunities for Aboriginal people, and develop more productive partnerships. UBC is committed to ongoing dialogue on all Aboriginal programs and initiatives at UBC.

Visit the Centre for Excellence in Indigenous Health online at health.aboriginal.ubc.ca.