By First Nations House of Learning on April 1, 2019 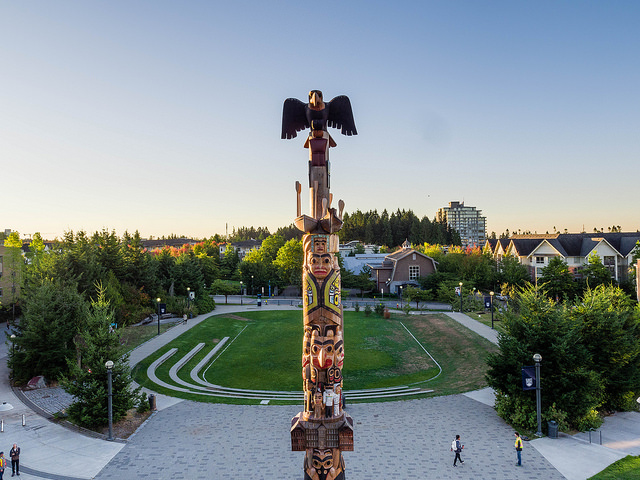 April 1, 2019 – Today is the second anniversary of the installation of the Reconciliation Pole, carved by 7idansuu (Edenshaw), James Hart, Haida Hereditary Chief and Master Carver. On this day two years ago, as many may recall, the event began with dark clouds overhead but then ended under a clear blue sky as the pole was raised by hundreds of people with thousands more cheering on.

Others too will remember the words spoken that day, in particular those who spoke about the painful experiences associated with Indian residential schools but also of hope for a better future for today’s Indigenous youth, now free from the most oppressive elements of colonization and able to access the education required to move themselves and their communities forward.

Words were also spoken in remembrance of those thousands of children who died in the schools. And things were said about the need for Indigenous and non-Indigenous peoples to walk the path of reconciliation together, which the pole idealizes in addition to telling the story of the time before, during and after the Indian residential school system impacted the first inhabitants of this country.

The day’s event moved President Ono to state that “the pole reflects UBC’s commitment to provide continued education and awareness about the Indian residential school system and the steps we must take to move forward together.”

Since that day two years ago, the Reconciliation Pole has come to be viewed by many as a cherished member of the campus and its collection of world-class artworks.

But disturbingly, against this backdrop of optimism, this past Friday, on March 29th, a campus employee contacted Campus Security to notify them of vandalism to the Reconciliation Pole. Two of about a dozen 3-foot stakes that were ringing the base of the pole on a temporary basis had been removed from the ground and inserted into the back of the pole – one in an existing crack and another in the mouth of a carved figure. Campus Security immediately removed the stakes from the pole. Thankfully there is no visible physical damage to the pole and all of the stakes have since been removed.

Despite there being no physical damage to the pole, this troubling act of vandalism nevertheless represents an affront to everyone on and off campus who embrace the pole’s symbolic importance and artist value. More specifically, this condemnable act profoundly disrespects everything the pole represents, from the voices of the survivors of the schools, the memories of the children who died in them, the hopes of Indigenous peoples, to the honour of all Canadians who are striving to shake free from the darkness of the past to embrace a brighter future together. As well, it disrespects the tremendous vision of James Hart who created this beautiful monument.

7idansuu has been informed of the incident as have others on campus. He indicated he would like to use this incident as an opportunity to bring people together in understanding the pole’s meaning and all that it represents. He provided the following statement:

He also indicated he supports a cleansing ceremony taking place with Musqueam representatives on whose territory the pole stands. A private ceremony was held on Saturday.

In closing, please take this moment to reflect on the Reconciliation Pole, both in terms of what it represents but also on what it means to you, and feel free to voice your appreciation for it in some manner.