June 7, 2017 – On Saturday, May 27th, the First Nations House of Learning held its annual graduation celebration at the UBC First Nations Longhouse for participating Aboriginal graduates. This year, out of 172 grads from the Fall 2016 and Spring 2017 classes, 43 grads celebrated with family, friends and supporters, including faculty, staff and Musqueam representatives.

This year’s keynote address was given by 7idansuu (Edenshaw), James Hart, Haida Hereditary Chief and Master Carver, who carved the Reconciliation Pole recently installed at UBC.

Hart told the assembled graduates they were an “amazing thing to see,” particularly in light of the oppression his generation had faced. 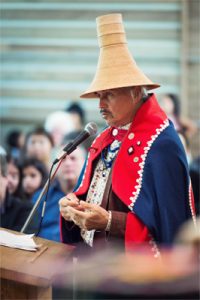 “We come from an era where suppression was pretty deep. At one time, it was against the law to hire a lawyer to help us. We were under heavy suppression in those days.”

He told the grads, “We are proud of you all, for what you are doing, your choices.” Then, with a fist pump, he added, “We need you… the fight is big.”

He related a time when his community once shunned those who got an education.

“We stomped on them because we were all threatened by them. And so, it made them pretty meek and they couldn’t do anything. Now I see people stepping forward and taking on the challenge. I support them. We push them forward because it is education. Education is the key.

It’s about us mixing with what’s going on with this world and making the most of it, being part of the innovation. We want to be part of Canada.”

Regarding the past, he acknowledged, “Canada treated us pretty rough. But we’re still part of it, and we’re working all that stuff out.”

But, with respect to the environment, he said, “We’re destroying the earth with our choices of poisoning the water, poisoning the air, poisoning the lands. We’ve got to work this out and reverse this way of thinking, and stay connected to the bears, to the wolves, the killer whales, to the elephants, to whatever it is. It’s so wonderful to be part of it all. These things in life are important.”

As for the business-as-usual approach — “the poisoning, the destruction” of the environment — he said, “(we) really can’t do that anymore. It’s showing up everywhere and we need to survive with everything else.”

He added, addressing the grads, “So you’re growing into interesting times, and your responsibilities are great, but with the innovations that are coming up, you guys are going to be part of all that.”

On residential schools, he remarked, “I would personally love to see the paper work, the decisions, on all these people that got together, who sat down and devised this program to destroy us. It would be wonderful to see the paper work. So I hope some people will do some research, pull that forward, and have it so that we can all see how they came up with this plan, this evil plan to hurt us all.”

Still, he pointed out, “we’re getting past that (history of abuse), getting around it. And not too long down the line, our youth are going to have to be taught about all this abuse, stuff that has taken place in our history.” 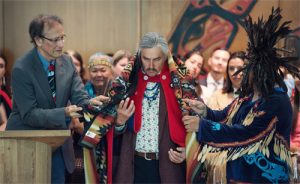 To the grads, he advised, “We have to work hard, whatever we choose. It’s the good fight. It generates energy. It brushes off on others.”

He concluded, “Thank you all for your choices and your decisions.”

Afterward, he was blanketed by Linc Kesler, director of the First Nations House of Learning, and Alec Dan, Musqueam representative, for his work restoring the Looplex X, a replica of Bill Reid’s famous Lootas, a traditional Haida canoe, which hangs in the Forest Science Centre, and for carving the Reconciliation Pole, which stands at the south end of the campus.

She related how her life underwent a major transition when she moved from Regina to Vancouver five years ago, including how her assumptions were challenged, and in the end how much UBC changed for the better her life and her self-perception. 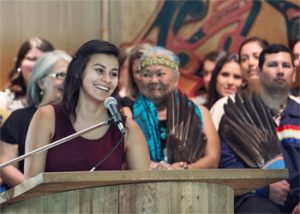 Here’s an excerpt of her address:

I dreamed of moving to the West Coast for years and when I finally arrived I thought UBC would be this easy, exciting, new adventure of meeting friends, going to Kits beach for sunsets and fitting in school just enough so that I would somehow get an 80 average. But as all of us graduates know, it was just a little more complicated than that.

I suddenly found myself all alone on this huge campus. My school grew from 400 people to 50,000. It was a little intimidating. I was really overwhelmed. No one could’ve prepared me for the challenges I (would) face: 200 students in lectures, being expected to walk from Buchanan or the Chan Centre to the Forestry building in 10 minutes, feeling like you’re only known by your student number in first year, or learning that you have two finals in a day.

We faced difficult times. I failed math twice in row. I eventually accepted that I would never get into medical school. And every year I always spent way too much money and not enough time studying in the first month of school.

But I don’t only want to talk about the hard times, because UBC is so much more than that.

My failed classes made me realize that science wasn’t for me. I walked by the theatre and film buildings every day dreaming and eventually with the courage and support from YouTube pep talks, I eventually switched into arts and applied to get into the Creative Writing department.

I truly love UBC and the Longhouse. And I am grateful for everything you guys have taught me over the years. You’ve allowed me to become proud of who I (am) because growing up it was pretty hard in Saskatchewan.

Even though I don’t know what’s ahead for me, UBC (has) taught me that even if you fail, you definitely are not a failure — and I learned that the really hard way. But I’m glad I learned it. It’s just time to get back up and try again, and that’s what I’m planning to do.

Like previous years, the celebration was live-streamed for the benefit of friends, family and supporters, including interested faculty and staff, who were unable to attend the event. The recording can be viewed below. 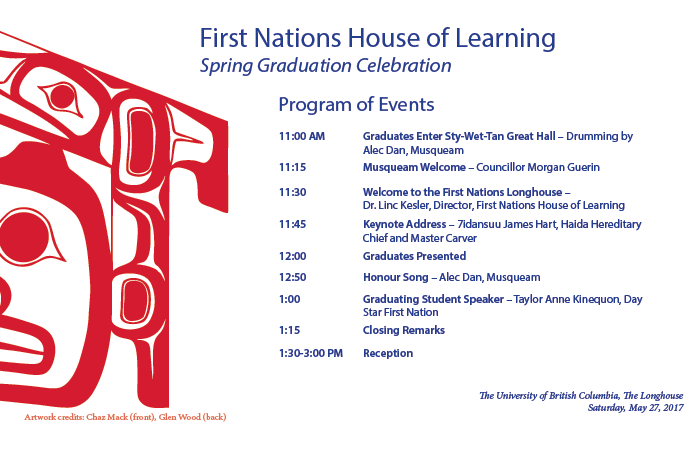