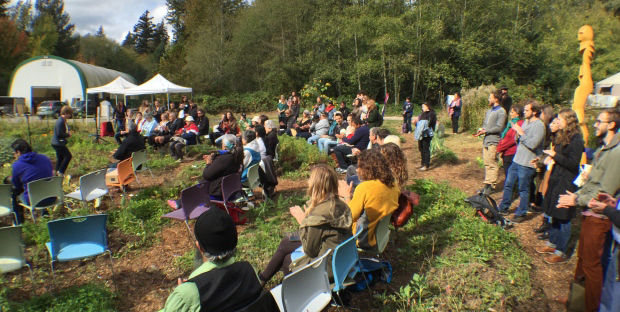 October 25, 2016 – Earlier this month at a traditional ceremony, UBC Farm’s Indigenous Health and Research Education Garden received a Musqueam name, a pole by an Algonquin artist, and had a small boulder recognized as its place marker.

The garden, like the campus itself, is situated on the traditional territory of the hən̓q̓əmin̓əm̓-speaking Musqueam people, and thus was given the name “xwc̓ic̓əsəm” (‘place of growing’) by the Musqueam community.

“We are honoured and grateful to the Musqueam to live, work and learn in their traditional territories,” Dr. Eduardo Jovel, director of Indigenous Research Partnerships, acknowledged in a UBC Farm report.

Indigenous Research Partnerships, as part of the Faculty of Land and Food Systems, manages the garden, which is one of a few others at the UBC Farm. It conducts research, education and community programming at the garden, where over 40 varieties of medicinal plants native to the region are grown.

“The significance of the ceremony that took place is a reflection of the good intentions, purpose and relations between UBC and Musqueam people,” Dr. Jovel added. “It’s about learning to be respectful of the land and the place. It’s about the ways we develop meaningful relationships to the land and enhance land-based teaching and pedagogies.” 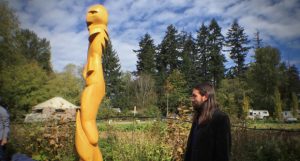 “I call this piece Thunder Child, because I was hit by thunder during it,” he told the gathering, as reported by CBC News.

“I didn’t get hit by the lightning. I looked up, and about five feet in front of me I saw the bolt start as a ball and get bigger and then basically, I got thrown back to the end of the piece,” he said.

The people in attendance also witnessed a large stone being anointed with ochre and covered in eagle down as a way of permanently marking the garden’s place.