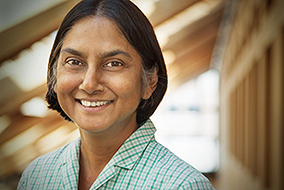 From Guyana to Vancouver, Janette Bulkan has built a career on protecting indigenous land rights and access to resources.

Her involvement with social issues in forestry began after she noticed more and more chainsaws in indigenous communities in her homeland of Guyana. The men from these communities were getting into logging.

According to Bulkan, the assumption was that any illegal logging in the country was the work of small-scale, local forestry operations. But after visiting forest sites and documenting practices around the country, she saw that it was the large-scale operations that were not adhering to guidelines and policies.

“Many of these operations were owned by transnational corporations which held, or illegally rented, logging concessions,” she says.

A new UBC faculty member, Bulkan investigated the slippages between national policies, and government and private sector practices, in forestry in Guyana for her PhD research, which began in 2003 at Yale University. She also worked with indigenous groups to document how these large companies were violating well-established forestry guidelines, land claims and human rights.

They took their concerns to the international banks supporting one of the transnational loggers. As a result, one bank reduced its investments in the sector, and the government imposed penalties on illegal operations.

“Now illegal logging is almost always talked about in the context of what happens on large-scale forestry operations.”

For Bulkan, this was an example of how business contracts may put the security of indigenous people at risk, despite the safeguards put in place to protect these communities.

Bulkan is teaching indigenous forestry and community forestry in the Department of Forest Resources Management. She sees many similarities between the obstacles faced by indigenous groups from her home country and those faced by Canada’s First Nations. More than 75 per cent of Guyana is covered in forests. Like Canada, Guyana’s economy is strongly tied to natural resource extraction. There is also a growing interest to use the forests for purposes other than logging, such as selling carbon credits. In both countries, issues around indigenous land rights and land ownership continue to persist.

Bulkan has been involved in the Forest Carbon Partnership Facility in Suriname, which is coordinated by the World Bank, and other aspects of forest carbon management under what is known as the REDD+ approach (Reducing Emissions from Deforestation and forest Degradation).

As one of her next projects, she plans to connect indigenous groups in B.C. and Guyana that may benefit from payments in exchange for protection of one or some of a basket of forest-based environmental services such as sequestered forest carbon, globally important habitat or biodiversity, and supplies of clean water. She wants to help them demonstrate their legal rights to these resources and to use those rights to provide small but reliable incomes from environmental services so they can develop long-term strategies to support their growing populations.