By Development and Alumni Engagement on May 27, 2013 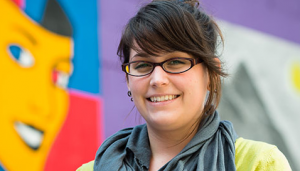 “Among Aboriginal people, there is a prophecy known as the Eighth Fire,” says Vanessa Imeson, a fine arts student and recipient of UBC’s Aboriginal Fellowship Award, “it explains how different cultures must come together and impact each other in a positive way instead of fighting. The more we know each other, the better off we are.”

For Vanessa, the ability to tell stories that transcend language and culture compelled her to leave her Ontario home and join the Department of Theatre and Film at UBC. “I came here because there is a lot more integration of First Nation culture and Indigenous arts,” she explains. “I am really interested in puppets and theatrics. You can tell a story that doesn’t necessarily need to be in English to be able to be understood, because of the visual elements.”

Although Vanessa specializes in costume design, her creative flair inspired her to explore the production side of show business. The Jessie Richardson Theatre Award Society, a group that celebrates outstanding achievements in Vancouver’s theatre community, recently recognized Vanessa for her production of
The Bomb-itty of Errors, a remake of the Comedy of Errors set to rap and hip-hop music.

“The Bomb-itty of Errors was written in the early ‘90s,” says Vanessa. “It references a lot of music from the early hip hop era, such as Run-D.M.C. and Cypress Hill. I wanted to make it more contemporary, so younger audiences could relate to it. I used artists like Nicki Minaj and LMFAO. Then I mashed these hip-hop elements with Elizabethan costume—traditional meets contemporary!”

While Vanessa’s skill and accomplishments have made her as a rising star in Vancouver’s theatre community, she credits the Aboriginal Fellowship Award for allowing her to succeed.

“I come from a very low income family, and my band doesn’t cover art school,” states Vanessa. “I wasn’t sure how I was going to complete my master’s degree. This fellowship helped me. It gave me the opportunity to study and not worry about working. It allowed me to put all my focus into what I was creating.”

Vanessa’s vision is to take native folklore and make it more relevant to today’s Aboriginal youth. “As urban Indigenous people, our stories are changing to fit our surroundings,” she says. “I want to tell stories that haven’t been told before—or in a new way.”

After graduating this year, Vanessa plans to forge ahead on her path of urban storytelling, using traditional Aboriginal figures like Raven and Coyote. She hopes to spend some time in Nunavut immersing herself in Inuit culture, so she can integrate these elements into her stories. “We don’t really hear about their mythology as much within the larger Canadian nation.”

According to Vanessa, it’s important to provide children in financial need with the opportunities they can’t get on their own. She adds she is grateful for UBC’s support and community, which have enabled her to grow and thrive as a storyteller. “Theatre lets us celebrate our differences, know what’s going on in the community, and understand each other’s backgrounds,” Vanessa says enthusiastically. “Through theatre, we can change the world!”