Advocate for Her People 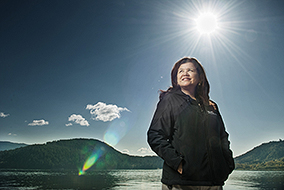 
In 2007 when a punctured pipeline owned by Kinder Morgan leaked oil in Burrard Inlet, members of the Tsleil-Waututh First Nation, led by Chief Leah D. George-Wilson, were immediately on the ground for the cleanup.

“My role as Chief was to ensure that the titles and lands of our people are protected, that our voice is heard, and that our concerns and issues are not brushed aside,” explained George-Wilson, who graduates from UBC Law this May.

George-Wilson and members of her band were soon at the negotiating table with Kinder Morgan to discuss a protocol agreement. Since the spill, Kinder Morgan has financially contributed to the on-going resourcing of the region’s Marine Stewardship Program. Implemented by the Tsleil-Waututh, the program funds pollution assessments of Inlet waters and salmon enhancement initiatives.

George-Wilson was the first woman to be elected Chief of the Tsleil-Waututh First Nation, a position she held from 2001 and 2003 and again from 2005 and 2009. Prior to this, she worked with the community in various capacities including serving on the BC Treaty Process negotiating team.

Law school was a natural career path for George-Wilson, who had spent the last 18 years finding equitable and constitutional ways to protect the rights of the Tsleil-Waututh within their traditional territory. In 2009, she decided to take an educational leave from her duties and soon joined UBC Law.

“As a mature student, I really tried to help the younger Aboriginal students,” she said. “In many cases, law school is a completely different environment from where they came from. It’s like its own world. I wanted to make sure that other First Nations students didn’t feel alone.”

George-Wilson was an active member of the Indigenous Law Students Association and also sat on the admissions committee.

“I provided feedback on the Aboriginal applications that came through. There was always a lot of discussion around admissions and I brought what I thought was important to consider from an Aboriginal perspective.”

Currently, George-Wilson is articling with the West Vancouver-based law firm Ashcroft and Company where she can continue her work with the First Nations community.

Remembering her time at UBC, she says, “It was an enriching and enlightening experience. I never thought I would say I would miss law school, but I miss it. I don’t miss churning out papers and sweating out exams, but I miss the camaraderie.”