By Silvia Moreno-Garcia for UBC Reports on December 11, 2012 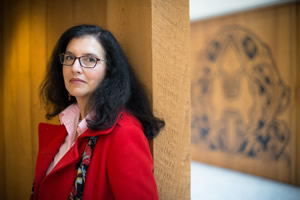 When Melania Alvarez’s son was placed in a lower-level math class in junior high school, she was caught off guard. The Mexican-born mathematician, then working in Wisconsin, knew that Rodrigo had an aptitude for math.

It turned out he had been placed in the low-level course because he had an Hispanic name. Later on in high school—after being placed in appropriate classes—he scored a perfect 800 on his standardized math test for college admissions.

“Living in the United States made me empathetic to some of the issues Aboriginal students face,” says Alvarez, who now works at UBC to develop programming for those students in local high schools.

“There are certain stereotypes and patterns, even some that are meant well, which can harm Aboriginal students.”

Alvarez is of Spanish and Purépecha (an indigenous people from the state of Michoacán) descent. Her interest in math led her to a bachelor’s degree in actuarial science, even though her conservative family expected her to marry and follow a more traditional path.

Math, she says, expanded her horizons and allowed her to travel the world.

Alvarez’s love of numbers and her personal insight into the barriers some communities face also made her a fierce proponent of improved math education, a passion that eventually brought her to UBC, where she works as coordinator for the outreach programs at UBC Mathematics and the Pacific Institute for the Mathematical Sciences (PIMS).

Aboriginal students make up more than 10 per cent of the school-age population in B.C., with that percentage increasing steadily. But only two per cent of those students complete Principles of Mathematics 12, a prerequisite for many
post- secondary programs and a requirement for admission to UBC Science.

For Aboriginal students interested in the sciences, poor performance in math can rob them of personal potential and career options.

In 2007 Alverez helped start two math summer camps hosted at UBC and at Britannia Secondary School in east Vancouver. (Britannia has twice the proportion of Aboriginal students as the provincial average.) She has developed training materials for Aboriginal teachers, promoted mentorship opportunities and created specialized programming, often in partnership with the First Nations Education Steering Committee, the Vancouver School Board and UBC.

While Alvarez is proud of her work, she’s even prouder of the students.

“These are capable young people. Many times they are classified as learning disabled when they are not. After being told they can’t do something, they start to believe it. We need to change our attitudes. ”

Alvarez believes that the problem may also lie in insufficient math training for teachers. She hopes events like the PIMS annual Changing the Culture teacher development conference will help. Programs that support the expansion of pre-service training, like UBC’s Native Indian Teacher Education Program, could also improve math delivery.

Alvarez would also like to provide more support for parents to expand the reach of the programs geographically and involve more disciplines.

But at this point the funds to achieve an expansion aren’t there, she says. The program scrambles every year to find funds for programs such as the Emerging Aboriginal Scholars program, mentorship programs, and the math workshops for teachers and students that take place in more than 45 schools across the province.

This winter, Alvarez will be presented with the Canadian Mathematical Society’s 2012 Adrien Pouliot Award in recognition of her contributions to mathematics education in Canada.