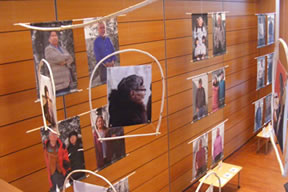 The Inquiry exhibition is on display from October 29 to November 13. It tells the story of the Mackenzie Valley Pipeline Inquiry.

The inquiry, which was held in the Northwest Territories in the early 70’s, has been widely recognized as an important time in BC’s history for the voice it gave to the Aboriginal people whose traditional territory would have been affected by the pipeline.

In 1974, UBC graduate Justice Thomas R. Berger of the Supreme Court of British Columbia was appointed by the federal government to hold hearings into a proposed natural gas pipeline from the Beaufort Sea, down the Mackenzie Valley, to US markets.

Justice Berger’s task was not to rule for or against a pipeline, but to recommend conditions that would be placed on construction. Most Canadians assumed the pipeline would go forward on schedule.

This Inquiry exhibition marks the 35th anniversary of Judge Berger’s final report. Hanging above the exhibition are beaver stretchers with twenty historical images shot by Professor Jackson during the Community hearings. On the walls are life-sized portraits of key organizers shot by photographer Linda MacCannell.

The exhibition is free of charge and open to the public. For more information, please visit http://wiki.ubc.ca/Documentation:Berger_Inquiry_Installation

Drew Ann Wake is the curator for the Inquiry exhibition.

Here is a list of upcoming public events scheduled for the Inquiry Exhibition:

Coffee with the Curator
November 9, 12:30pm to 2:00pm, Forum
Drop by The Forum for coffee and an informal chat with the curator of the Inquiry exhibition. After graduating from UBC, Drew Ann Wake covered the hearings of the Berger Inquiry for the CBC. Over eighteen months she travelled to communities along the Mackenzie Valley and around the Beaufort Sea, “the best first job on earth”. She now leads LiveWires Design, a company that builds educational computer games.

Passion for the Land
November 13, 9:3 am to 11:30am, First Nations Longhouse
The First Nations House of Learning will host a panel discussion “Passion for the Land: Traditional Knowledge From the Past – For the Future”. Panelists include Alestine Andre from the Gwich’in Social and Cultural Institute (Tsiigehtchic, NWT); Gabrielle Mackenzie-Scott of the Centre for Indian Scholars (Yellowknife, NWT); Julie Cruikshank of the UBC Department of Anthropology, and Glen Couldhard of the UBC Department of Political Science. The talks will be followed by a question period and refreshments.

Inquiry
November 13, 9:30am to 11:00am and 1:30pm to 3:00pm, Forum
Classes of students from Windermere Secondary School will engage in the hands-on history activities in the Inquiry exhibition. They will be asked to “put themselves in Judge Berger’s chair” by reading the evidence and debating recommendations. Thomas Berger and lawyers who served as counsel at the Inquiry will drop by to coach the students. Visitors are welcome to observe.

The Inquiry Film
November 13, 12:30pm – 2:00pm, Indigenous Classroom
Professor Michael Jackson of the UBC Faculty of Law and John T’Seleie from the NWT Department of Aboriginal Affairs and Intergovernmental Relations will show a segment of the 1977 documentary, The Inquiry Film, in which they both appeared. This will be followed by a discussion of land settlement agreements in the Northwest Territories and a question period.

Stories Told
November 13, 3:30pm to 5:00pm, Forum
As a young man, Dr. Patrick Scott went to the Northwest Territories as the cameraman for the CBC during the Berger Inquiry. He will present a slide show with the voices and photos from the community hearings. After participating in the hands-on history activities, Patrick will take audience questions about the impact of the Berger Inquiry today, on the 35th anniversary of its report.

Inquiry Launch
November 13, 6:00pm to 8:00pm, Forum
The Inquiry exhibition will be formally launched with a reception (by invitation) at 7:00pm Thomas R. Berger will speak briefly.