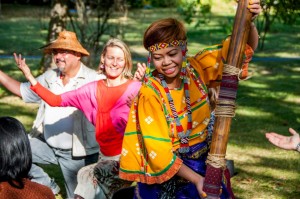 On September 14, 2012 over 50 students, faculty members and artists from Vancouver gathered at the First Nations Longhouse for “Common Threads”, a conference to celebrate the solidarities between the indigenous peoples of the Philippines and Guatemala. This event was organised by the UBC Philippine Studies Series and the International Students Association, and sponsored by the Global Fund.

Why the Philippines and Guatemala? And why both countries together? This project was inspired by an anthropology course I took last year on the “Ethnography of Central America”. What initially seemed a disconnect between me, a Filipina, and the course topics at hand, eventually led to an exploration of a relationship often not at large in popular consciousness: the ancient currents connecting the Philippines and Latin America. My professor Dr Felice Wyndham encouraged my ambitions to write and illustrate a book I later named Compañeras, Kumpanyeras, using the same word for ‘companions’ in both Spanish and Filipino, to explore the historical and cultural parallels between our peoples. Having worked with indigenous communities in the Philippines, I became eager to learn from and work with those in Latin America—I imagined I would see myself and my people in them. And so I applied for the Global Fund to implement a community project with Mayan women in Lake Atitlan, Guatemala this summer. Having returned from my travels, “Common Threads” then became an opportunity for me to join many others in telling these same stories of solidarities.

The Longhouse was incredibly supportive of this project, which we collectively understood to be a contribution to the global indigenous movement. The similar colonial histories and neo-colonial realities shared between indigenous peoples in the Philippines and Guatemala are, ultimately, also understood by First Nations communities. We were therefore honoured to have Victor Guerin to begin our gathering with his drum and songs from the Musqueam people, as Rick Ouellet welcomed us in the Longhouse.

The conference honours the power of storytelling. Valentina Ricca Vargas (International Students Association) presented on her recent investigations on Mayan communities affected by Canadian mining in her country, Guatemala. Honorio JR Guerrero (Canada-Philippines Solidarity for Human Rights) presented on Mobit, a project he co-founded providing social media literacy to mining-affected communities in Southern Philippines. Responding to these issues on land and resource exploitation, Ricardo Segovia (Etech International) in turn presented on the engineer’s potential for socio-political activism within the mining industry. To end with a celebration of empowered, de-colonised peoples, I presented on my reflections on working with Mayan weavers in Guatemala and indigenous Filipino students who, I have come to know, do speak in clear strong voices we have to hear.

As presenters, our lived experiences heightened our understanding that in the heart of these intercultural solidarities –between indigenous and non-indigenous, between Filipina and Guatemalan—lies one clear message: we work together because we can see ourselves in each other.

During the open forum we were honoured to have as panelists Dr Peter Cole, Assistant Professor in Indigenous Education at UBC, Dr Chandu Claver, spokesperson for the Cordillera Peoples Association, and Ignacio Ochoa, director of Fundación Nahual. Their many years of experience working personally with indigenous communities in their home countries helped deepen the conversations among participants. Accompanying our discussions is a photography exhibit curated by Dada Docot (UBC Philippine Studies Series) on the theme of cultural resistance in the Philippines and Guatemala.

While our bodies were nourished with Filipino and Guatemalan traditional foods, our spirits took flight in a cultural presentation led by Kathara, a collective of musicians and peace activists who champion the Filipino indigenous arts in Vancouver. The gathering came to a beautiful close with live music and dancing in the gardens outside the Longhouse. During our heartfelt farewells, Rick Ouellet quite poignantly shared and many of us agreed, that with such work “we are weaving a tapestry.” May there be more of such gatherings to come!

A full documentation of “Common Threads” can be seen at www.ubcphilippinestudies.ca. The collective welcomes new members and collaborators!