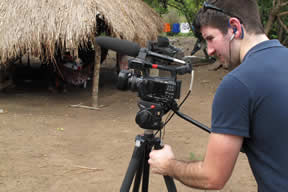 “This is the kind of impact journalists dream about,” says Peter W. Klein, the director of UBC’s Graduate School of Journalism and co-instructor of the global reporting class.

In February, the UBC reporting class traveled to southern Brazil to investigate resource and territory disputes between farmers and indigenous people. The students interviewed Gomes’ son and nephew about the execution-style attack of the Guarani tribal chief, and their resulting video and story appeared on the New York Times website on June 9.

In the five weeks since these stories, 18 people have reportedly been arrested in connection with the Gomes murder, including the head of a major security firm that protects farmland from Guarani land reclamation efforts.

“The students and I were never in danger, but the experience underscored for all of us that we were clearly touching a nerve,” says Klein.

The UBC project started when student Calyn Shaw heard about Gomes’ murder in November. ”This was a really under-reported story and our goal was to give it the attention it deserves,” says Shaw. “These arrests are a good first step, but hopefully we inspire other news media and Brazil’s government to watch the process closely, to ensure that convictions occur and justice prevails.”

A group of program graduates are still following the story and are building a website dedicated to the issue of land disputes in Brazil, he adds.

This is the fourth project of UBC’s International Reporting Program, which results from a gift from Alison Lawton and Mindset Social Innovation Foundation.

Previous projects include: Ghana: Digital Dumping Ground, which won the 2010 Emmy Award for Outstanding Magazine Investigative Reporting, Cheap Shrimp: Hidden Costs, a multimedia project for the Globe and Mail, and The Pain Project, which explored the global pain crisis caused by morphine shortages, in partnership with CBS News, Al Jazeera and Global.