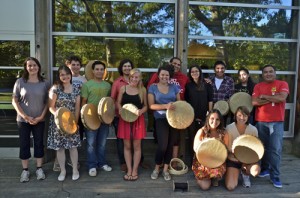 Fostered through the new partnership between the First Nations House of Learning and International Student Development, the inclusion of an Aboriginal cohort represents Jump Start’s commitment to engage with Indigeneity in a meaningful way both at the University of British Columbia and in the local community. It also addresses the need for an orientation program at UBC that is tailored to the academic and cultural needs of Aboriginal students specifically.

In addition to opening up registration to Indigenous students, the focus of Jump Start’s academic and social programming was widened to allow space for Indigenous worldview in the program through lectures, performance pieces, and the incorporation of Indigenous spaces into programming, including the First Nations House of Learning.

The 2011 Jump Start Orientation program kicked off on August 17, 2011 with an Opening Ceremony at the Chan Center to welcome students to UBC, and inspire students with the message “Ignite your Passion, Share your Story”. Jump Start approaches its two-week long orientation from the perspective of not only teaching students what resources they need to know to be successful at UBC, but also that each student enters UBC with a valuable set of knowledges that situate them well for success. 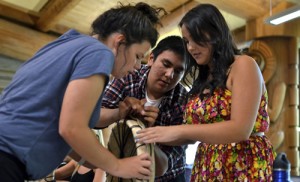 Cultural activities were just one component of the Jumpstart Program. Photo by Thane Bonar.

Held in the first week of the program, the Introduction to Musqueam lecture session was an opportunity for all students to become familiar with the people whose unceded traditional territory the University of British Columbia is situated on. Dr. Patricia Shaw of the First Nations Languages Program and Wade Grant, nephew of UBC Elder-in-Residence Larry Grant and current Musqueam Council member shared insights on the language, culture, and history of the Musqueam people.

Throughout Jump Start, Aboriginal students participated in all academic components of the program- such as lectures and the Introduction to Musqueam session- as well as many of the social events. Aboriginal cohort specific sessions were also held on a number of evenings throughout the program. Drum making workshops, paddle painting workshops, film and discussion sessions, and cohort dinners were all opportunities for members of the cohort to build community with each other and connect to their culture.

International and Aboriginal students were given many opportunities to interact and learn from each other throughout the program. It was this interaction that gives the Jump Start program one of its most meaningful contributions to UBC; a chance for two groups who might not otherwise engage, to meet and learn from one another. The result was many lasting friendships built on the acknowledgement and respect of different cultures. Likewise, the bonds that were developed between members of the Aboriginal cohort continue into the school year. We hope that the Jump Start program expands in the future to ensure that Aboriginal students receive the best possible preparation for life at UBC and find their `home away from home` at the First Nations House of Learning.

The First Nations House of Learning would like to thank all presenters and facilitators who made the Aboriginal cohort of Jump Start possible, including Dr. Dory Nason, Dr. Patricia Shaw, Wade Grant, Gwaii Edenshaw, Reuben George, Curtis Ahenakew, and Adam Beach.