Learning about Aboriginal Health, Straight from the Source 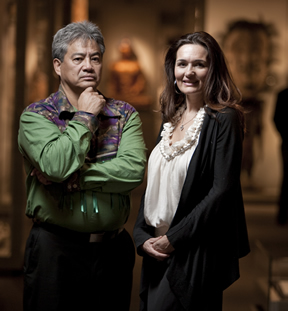 Chief Wayne Christian of the Splats’in First Nation shows an old photograph of Aboriginal children to a group of UBC graduate students. It’s not a happy scene.

The kids are standing in the back of a cattle truck, about to be carried off to one of the residential schools Canada once used to forcibly assimilate Aboriginal youths. Many children not only lost their culture and language in those schools, but also faced physical, sexual and emotional abuse.

“When I look at these pictures, I think of what would happen to my children and grandchildren if that ever happened again,” Chief Christian says. “We’re seeing the impact of this now with people on the streets.”

He sees infectious diseases like hepatitis C plaguing his people — the latest in a long line of afflictions, stretching back to the smallpox epidemic that nearly wiped out his ancestors in the 19th century.

Such first-hand accounts form the backbone of a new graduate level course in the School of Population and Public Health, aimed at helping future health professionals and policy-makers grasp the challenges facing one of Canada’s most marginalized populations.

Instructor Patricia Spittal and the various Aboriginal guest speakers address such topics as the effect of legislation on Aboriginal people’s health, the impact of diabetes and the H1N1 virus on Aboriginal communities, and the role of traditional medicines.

“Having one course dedicated to Aboriginal and non-Aboriginal learners coming together to grapple with the existing disparities, both on- and off-reserve, is critical if we are going to shift public health policy, practice and ethics,” says Dr. Spittal, an Associate Professor in the School of Population and Public Health, who developed “Aboriginal Public Health” with several advisors,including Shannon Waters, an Aboriginal physician who monitors First Nations health for the federal government.

The course dovetails with one of the key priorities identified in UBC’s new strategic plan: To engage Aboriginal people in mutually supportive and productive relationships, and to integrate understandings of indigenous cultures and histories into its curriculum and operations. The course also advances the provincial government’s goal of increasing the number of Aboriginal health practitioners.

“There aren’t that many universities out there that have this type of graduate course in public health, so I think it’s really important that UBC is being a leader in this area,” says Miranda Kelly, a student in the School’s Master of Public Health program. “The guest lecturers really bring that personal element to it. Speaking to people who have actually lived through these experiences is so much more informative than reading it from a book.”

Dr. Spittal, though not Aboriginal herself, has her own on-the ground insights to share. She leads the Cedar Project with co-investigator Chief Christian — a study funded by the Canadian Institutes of Health Research that examines hepatitis C and HIV vulnerabilities among Aboriginal youth.

“Working with young Aboriginal people who are surviving trauma and living on the street really highlights the particular challenges in health care policy, ethics and surveillance,” Dr. Spittal says.