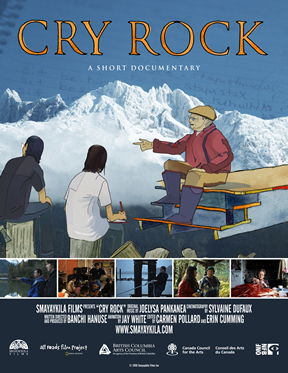 In February 2011, the University of British Columbia had the privilege to host a screening of Cry Rock, a short documentary written, directed, and produced by Banchi Hanuse, a UBC First Nation Studies Program alumna.

This short documentary effectively presents “the wild beauty of the Bella Coola Valley blended with vivid watercolor animation to illuminate the role of the Nuxalk oral tradition and the intersection of story, place and culture.” The impressive visuals combined with the engaging narratives profiles one community’s response to the endangerment to traditional ways of story telling and affirming one’s cultural and personal identity.

The screening was followed by a question and answer period with Clyde Tallio, a prominent figure within the movie, and an important Nuxalk language and oral history teacher in the community of Bella Coola. The event drew a large audience of students, faculty and community members. If the general discussion was any indication of the film’s reception, audience members appeared to have left with a better understanding of specific Aboriginal issues, to which Hanuse’s portrayal of Bella Coola served as a backdrop. Hanuse, Tallio, and their community’s challenge was brought to light; they are involved in an on-going struggle to hold on to their language, stories and identity in response to a history of colonialism and the encroachment of non-Aboriginal culture.

Cry Rock has been featured in numerous film festivals and is still being showcased at major festivals throughout North America. For more information on Cry Rock, and for information on these various screenings, to watch Cry Rock’s trailer, or to purchase the film, please explore the links below.

On behalf of those who co-sponsored, organized, and helped host Clyde Tallio and screen the film, we would like to thank all those that attended and participated in the event.