When the Tlingit community adopted UBC student Éedaa Heather Burge, she was brought in from the cold. 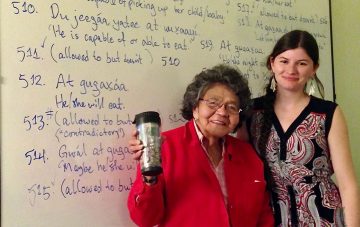 Studying the language in Juneau, Alaska, that could be taken literally, but the Lingít phrase for adoption ‘A tóot ajeewatán’ means to take someone’s hand and bring them inside. Her adoptive mother and teacher, Elder G̱uneiwtí Marsha Hotch, recognized Burge’s passion for the language and wanted to ensure she was integrated into the community.

Hotch, a Lingít teacher for more than 20 years, has seen firsthand the effect of learning one’s heritage tongue: Tlingit students stand straighter and hold their heads higher when they speak the language. She encouraged Burge to study sociolinguistics to bring Lingít back to the region while empowering the speakers. “And I think she’s done that.”

With Burge’s adoption came an important responsibility to her adopted family and community to learn the language, and be a good community member as well as a good scholar, says Burge, a linguistic anthropology doctoral student working in the Yukon and Alaska. “It felt great and terrifying. It was something I didn’t take lightly, and I know my adoptive mother didn’t take lightly because you have a responsibility to each other.”

Her entry into one family shone new light onto aspects of another: introductions in Lingít detail one’s lineage, so Burge began looking into her family history and discovered her grandfather had connections to the Mohawk nation and Akwesasne community. Raising a young family in Texas, he may not have felt safe to identify as Indigenous at that time, she says – now, his granddaughter is part of two Indigenous communities, reconnecting with cousins in Akwesasne. “It has me thinking about how identify manifests in language work and for folks who are mixed Indigenous, how do you navigate that responsibility to multiple languages?”

As an adoptive daughter, Burge feels driven to ensure her actions do not reflect poorly on the community that welcomed her, something with which academia does not have a good history in First Nations communities in the USA and Canada. Scholars often entered communities to do work that wasn’t left in the community, or was unusable to non-academics, Burge says.

Academia assumes Western ways of knowledge and investigation are correct, and are the only valid forms, and often dehumanizes research including data collection. As an example, the ethics application required for research is also used for medical consents, is multiple pages long, and often changes the relationship to one of researcher and subject, rather than a collaborative conversation, says Burge. “It hints at the continued structures and ways we think about research in academia that’s problematic.

Attending both the University of Alaska and UBC, going to academic conferences, and discussing concerns with Indigenous communities, Burge discovered this was a systemic issue. “I want to go back and teach at the university that gave me so much but I don’t want to be a participant in a system that’s actively or passively violent to folks going through it too.”

This realization informs Burge’s doctoral work, which aims to

develop and implement a reciprocal research framework based within, and partnered closely with, the Tlingit community, developing resources the community wants, sharing research and resources that are accessible, and guided by the community’s ways of practice, including using existing conflict resolution practices if required.

This is nothing new, Burge says, and is an implementation of practices Indigenous scholars have been recommending for years. But it could serve as a ‘case study’ for institutions.

Those Elders who have put so much time into training me to be a good community member, and person, and speaker, how can I be sure my other community, the academic community, is reciprocating, putting back useful and respectful knowledge?

This has included having community members be a part of grant writing processes, having academics clearly outline their skillsets to determine where they might be most useful, and leveraging the academy’s resources for the community’s goals. Constant communication is important, as well as focusing on the relationship rather than the research agenda.

Working with Burge – whose Tlingit name Éedaa or ‘ocean phosphorescence’ is “very appropriate” – and other young teachers, Hotch hopes to see more speakers every generation, through immersion schools and programs that support family learning.

Burge hopes her time with Tlingit will help her navigate being an ancestrally mixed Indigenous scholar, a community member, and an academic, and help remove some of the pain for others walking the same path. “How do I make sure I’m doing good work for all sides of my being? Hopefully this will open up conversations about what it means to be an Indigenous scholar working in this area.”

COVID-19 has required an adjustment of plans, with certain speakers or research postponed and a lot research moving online. But the latter also opened up the opportunity to reach students from further afield. She plans to defend in 2023, and will continue to have these relationships and conversations. “I’m not going anywhere.”