Continuing a legacy through medicine

June 21, 2018 – When brothers Miles, Noah and Keegan Marchand are asked who inspired them to become doctors, it’s the image of their late grandfather, the Honourable Leonard Marchand, that first comes to mind.

“I knew from a young age that I wanted to be a doctor, in large part because of my granddad. He was born on a reservation and grew up at a time when many Indigenous people were prevented from completing high school,” says Miles, the eldest and a recent graduate of UBC’s medical school.

After becoming the first member of the Okanagan Nation to attend high school in Vernon, Miles’ grandfather completed an undergraduate and master degree. He went on to a career in politics and dedicated his life to advocating for Indigenous peoples – contributions that were recognized at the highest level, with induction to the Order of Canada and Order of British Columbia.

“My granddad always told us that education was the key to the future. He inspired us to pursue further education and a career that would be really meaningful,” says Miles, who will be entering the next stage of his journey, as an internal medicine resident at UBC this summer.

But Miles is not the only Marchand eager to continue his grandfather’s legacy. 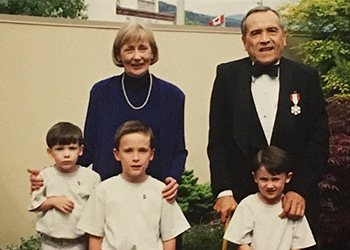 Miles, Noah and Keegan Marchand with their grandparents, Donna and Leonard Marchand.

“I’m pretty confident when I say I wouldn’t be in medicine if it wasn’t for Miles,” says Noah, a second-year UBC medical student, reflecting on an earlier trip to Nepal, where his brother was leading a sickle cell screening program for indigenous communities with fellow classmates.

“Getting to talk to medical students about how meaningful their experience was – how much impact they were having, even after one year of medical school at UBC – is really what confirmed for me that I wanted to become a physician,” says Noah.

For the youngest Marchand brother, Keegan, who will be entering UBC’s medical school this fall, hearing from Miles about his experience was also the deciding factor.

“The fact that Miles was making a difference in the lives of others right from year one is really what helped me to confirm I wanted to become a doctor too.”

The Faculty of Medicine’s Aboriginal Student Initiatives Coordinator, James Andrew, sees a broader significance to having all three brothers choose UBC as the place to begin their medical careers.

“With the Marchand brothers, we see an example of how our students are positive role models for other Indigenous people who may be thinking of a career in medicine. It’s really something to be proud of,” says Andrew.

Miles Marchand recently walked through the graduation door at the UBC First Nations Longhouse as a graduate of UBC’s medical school.

Since 2004, more than 80 Indigenous students have graduated from the medical program, with a growing number practising or completing residency in a range of communities in B.C.

“What I love about UBC is that you get experience practising medicine in urban and rural communities,” shares Miles. “What drew me here is the opportunity to give back to my community and province. I think as a physician you have the responsibility and the voice to be an advocate.”

While the Marchand brothers may only be at the start of their journey as doctors, they continue to take the lessons of their grandfather with them and already have a vision for a shared future.

“The long-term goal for the three of us is to open a clinic together,” says Miles. “Our hope would be to call it the Marchand Clinic and have it set in an Indigenous community in the Interior – like the one where our granddad grew up. Continuing the legacy of our grandfather through medicine: that’s the dream.”