April 4, 2017 – The day started out under a bank of rain clouds at the University of British Columbia and ended with a Haida totem pole being raised under sunshine to the cheers of thousands.

On April 1st, Reconciliation Pole, as it’s officially known, a 55-foot red cedar pole carved by 7idansuu (Edenshaw), James Hart, Haida Hereditary Chief and Master Carver, was raised according to Haida tradition at the south end of campus beside the Forest Sciences Centre.

The event began with a Musqueam welcome followed by a slate of speakers that included Musqueam and Haida chiefs, UBC President Ono, and residential school survivors, all of whom spoke to the importance of the pole. Then, after an honour song and blessing, hundreds of people of various ages and backgrounds took up ropes and pulled the pole into a standing position.

“I was honoured and humbled to participate in the raising of Reconciliation Pole at UBC’s Vancouver campus,” said President Ono after the event. “It was gratifying to see so many people turn out for this important occasion and to hear from residential school survivors.”

The pole tells the story of the time before, during, and after the Indian residential school system – a system that began in Canada in the 1800s and ended with the last school closure in 1996.

Click image for a description of the Reconciliation Pole [PDF]

The bottom half of the pole represents the time before Indian residential schools and features salmon, a bear and a raven. A schoolhouse, fashioned after a residential school Hart’s grandfather attended, is carved in the middle with students holding hands above it.

The top half of the pole represents the time after residential schools and features spirits, family, and a canoe. On top of the pole is an eagle about to take flight, which Hart said represents “the power and determination needed to look towards the future.”

“My hope for the pole is that it moves people to learn more about the history of residential schools and to understand their responsibility to reconciliation,” said Hart. “The schools were terrible places. We need to pay attention to the past and work together on a brighter future.” 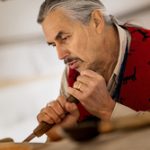 Hart carved the pole from an 800-year-old red cedar tree in Haida Gwaii, on B.C.’s north coast, before it was barged down to Vancouver. Hart has spent the past several months on campus working on the finishing touches.

“This pole reflects UBC’s commitment to provide continued education and awareness about the Indian residential school system and the steps we must take to move forward together,” said President Ono.

Fittingly, the pole looks toward the future site of the Indian Residential School History and Dialogue Centre, which will provide survivors and their families with access to the records of the Truth and Reconciliation Commission of Canada, and give UBC students and visitors ways to understand the history and lasting effects of Indian residential schools. The centre is expected to open in the 2017/18 academic year.

“Together, the pole and the Indian Residential School History and Dialogue Centre will provide a landmark and a place to better understand the history and lasting effects of Canada’s Indian residential schools,” said President Ono.  “We cannot change the past, but we can honestly recognize it. As the scales fall from our eyes, we can see clearly what we did not see before.”

The pole, jointly commissioned by the Audain Foundation and UBC,  stands on the traditional, ancestral and unceded territory of the Musqueam people.

UBC has a long-standing commitment to Aboriginal engagement, a key component of the university’s strategy, formalized in the 2009 Aboriginal Strategic Plan.

UBC has many programs and courses with an Aboriginal focus, including Canada’s oldest Aboriginal law program, the most successful program for graduating Indigenous doctors in Canada, an Indigenous teacher education program in operation for more than 40 years, the First Nations and Endangered Languages program, and the First Nations and Indigenous Studies program. Many other initiatives at UBC work to further the understandings of Indigenous cultures and histories in curriculum and operations.

About the Indian Residential School History and Dialogue Centre

Located in the heart of UBC’s Vancouver campus, the Indian Residential School History and Dialogue Centre will focus on the experiences of Indigenous peoples in B.C., where many of the schools were located, and will provide local access to records for survivors and their families on the West Coast. The centre will recognize the history and experiences of residential school survivors, and memorialize the thousands of Indigenous children who died while in attendance.

Advanced use of interactive media will give visitors to the centre the opportunity to explore extensive records and testimony and form their own understandings. The centre will also serve as a hub for academic and community research, education and public programming. For more information about the Indian Residential School History and Dialogue Centre, click here.