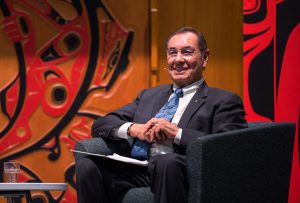 March 24, 2017 – Dr. Wilton Littlechild, Honorary Chief of the Maskwacis Crees and Commissioner with Truth and Reconciliation Commission of Canada, was last fall’s inaugural speaker at the Global Indigenous Rights Lecture Series at UBC.

The lecture, presented by UBC’s Institute for Critical Indigenous Studies in partnership with CBC Radio One and the Laurier Institution, and with the generous support of John Bell, was held October 17, 2016 at the UBC First Nations Longhouse.

Chief Littlechild, renowned for his more than three decades of work to advance the rights of Indigenous peoples in Canada and globally, recounted his efforts to get Indigenous peoples’ interests before the United Nations and his work with Truth and Reconciliation Commission of Canada, including some personal memories.

VIDEO: See end of article for the full video of Chief Littlechild’s presentation

He spoke how at the outset of his work at the UN level, beginning in the mid-1970s, Indigenous representation was not guaranteed. Rather, at the time, Indigenous representatives had to “borrow” speaking slots from non-governmental organizations in order to present their case, and that it could take up to a year to have an appearance confirmed.

Even so, he said a member state could object to a proposed presentation, which could set things back to square one. “It’s not a wonder why it took 27 years to get the declaration on the rights of Indigenous people adopted,” he remarked.

Since that time, he acknowledged that Indigenous peoples have gone from having “no voice” at the UN level to having four UN mechanisms available to address their concerns (see side bar).

These mechanisms, including the Rapporteurship on the Rights of Indigenous Peoples (1990), a body of the Organization of American States’ Inter-American Commission on Human Rights, shows, he said, “we have come a long distance.”

These developments aside, he remarked that the adoption of the United Nations Declaration on the Rights of Indigenous Peoples (“the longest debated” declaration in the UN’s history, taking some 25 years) was a special success.

He maintained, however, that he felt “betrayed” when Canada voted against it in 2007, despite having been closely involved in its development in the years leading up to its adoption (the United States, New Zealand and Australia also voted against it).

He also talked about the development of various international conventions, in particular, how he and the late Chief George Manual contributed to amending the 1957 International Labor Organization Convention No. 107, dubbed the Indigenous and Tribal Populations Convention – “the first and only existing legally binding international law on the rights of Indigenous peoples” at the time.

Their efforts contributed to ILO Convention No. 169 being adopted in 1989, known as the Indigenous and Tribal Peoples Convention (learn more about ILO and Indigenous peoples here).

He spoke about the development of the UN Convention on the Rights of the Child (1989), which includes a number of articles on the rights of Indigenous children. “One would have thought, surely to goodness everyone would have been in favour of children’s rights, right? No, it took 27 years, as well,” he said.

He revealed that the Indigenous delegation to the UN modeled their strategies after the women’s movement, which succeeded in gaining attention that eventually led to mechanisms to address their concerns. “I watched the women’s movement for 25 years in the international arena, and I looked at how they were succeeding at getting attention at the UN – very successful. So we model ourselves in terms of how they were working at the UN,” he said.

He listed a number of other UN-affiliated bodies and initatives whose work intersect with Indigenous people’s interests:

He let it be known that the UN Expert Mechanism on the Rights of Indigenous Peoples, which produces key studies on Indigenous issues, is seeking university partners to support its work.

Regarding the negative impacts of the Indian residential school system, he reiterated the notion that, “it was education that got us into this mess [and] it’s education that’s going to get us out.” He said of the TRC’s 94 calls to action, 72 are “really about education.”

Stolen Child: Chief Littlechild’s poignant story of a mother’s child being forcibly taken from her arms.

On personal note, he told a story of attending a wake in his community for a young woman, and how upon arriving he could see that the coffin was but a tiny box. He learned that it contained only a finger, the only body part discovered on the infamous Picton farm. And how when he had learned her parents’ names, he was hit by a sudden and painful realization that he had gone to residential school with them (“almost like someone [had] hit me in the gut”).

He said this story underscores the need to make the link between these types of tragic family outcomes and the legacy and impacts of residential schools.

He noted that as a result of a recent UN resolution on the matter of missing and murdered Indigenous women, the issue of violence against Indigenous women in Canada and elsewhere has for the first time received global attention.

He briefly spoke about his time in a residential school, noting how it was that despite being in the same institution as his sisters, he never got to know them, and that an electric barbwire fence was used to keep children from escaping.

Chief Littlechild expressed hope for reconciliation in Canada, particularly the new federal government’s stated support for the UN Declaration on the Rights of Indigenous Peoples, among other things. He dubbed it a “new era.”

As to reconciliation between Indigenous and non-Indigenous Canadians, he conceptualized it as two friends walking down railroad tracks. Where, if one tried to do it alone he would inevitably fall off, but by walking hand-in-hand they could walk for miles. “That’s what reconciliation is about. Going forward, we need to support each other in this work. It’s going to take all of us.”

The Global Indigenous Rights Lecture Series at UBC, presented by the Institute for Critical Indigenous Studies and the First Nations House of Learning, is an annual speaker series dedicated to global Indigenous rights. It is made possible by the generosity of John Bell.

NOTE: The links provided in this article were not part of Chief Littlechild’s presentation. Rather, they are provided here for information purposes only, and any errors related to them are the sole responsibility of author.