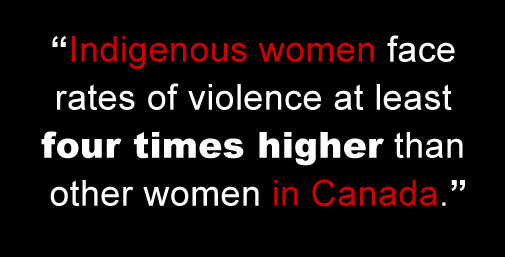 December 15, 2016 – Indigenous women face rates of violence at least four times higher than other women in Canada. UBC nursing professor Colleen Varcoe and her colleagues recently evaluated an intervention to determine what works best to improve the health of Indigenous women who experience violence, including partner violence. In this Q&A, she talks about the results of that study and what it could mean for all women who face abuse, stigma and discrimination.

What practices did you evaluate for the Aboriginal Women’s Intervention (AWI) study?

Our goal was to see if an intervention for women who have left abusive partners could be acceptable and improve the health and wellbeing of Aboriginal women.

We worked with Aboriginal women living in Surrey and in Vancouver’s Downtown Eastside. Twenty-one women took part in a pilot study, and 152 participated in a study of the refined intervention.

The women worked with nurses, one on one, on their priorities related to areas such as symptom management, chronic pain—a common result of abuse—and getting basic resources, such as a safe place to live. The women participated in information and support circles led by an Aboriginal elder, where they learned ceremonies and both traditional indigenous healing approaches, including smudging or drumming, and non-indigenous practices such as yoga and massage.

How did this approach work?

The women had statistically less depression and trauma symptoms, and statistically better quality of life and sense of control over their lives. Importantly, the women said that they felt more confident and stronger and that they were able to “open up” with their other health-care providers and with people in their lives with whom it was safe to do so.

One woman said she appreciated learning to “develop a trust with people and a trust in your feelings or your thoughts with them.” She called the entire experience a positive one, and said that over the last six months she definitely gained more confidence in herself.

How does this study compare with similar research?

As far as we know, this is the first study of its kind. Although interventions for women who have experienced violence are being developed and tested, we do not know of any other study of a program designed specifically for Aboriginal women.

Our study also emphasized having the women lead the work and identify their own priorities for their health and wellbeing.

What’s the next step?

We have just received $3.1-million in funding from the Public Health Agency of Canada to conduct a randomized control trial of iHEAL (Intervention for Health Enhancement and Living)—the study that AWI is built on—in B.C., New Brunswick and Ontario.

We plan to integrate what we learned to make the intervention useful for women from different backgrounds. In all settings we will include both Aboriginal and non-Aboriginal women, with the intention that the women will learn from and support each other as we learn from them.

Several groups are interested in turning the intervention into a program. The Vancouver Women’s Health Collective is considering a funding proposal to offer a version of the intervention to women living in the Downtown Eastside.

The Aboriginal Women’s Intervention study received funding from the Canadian Institutes of Health Research. Contact lou.bosshart@ubc.ca to obtain a copy of the study or request an interview with Prof. Varcoe.