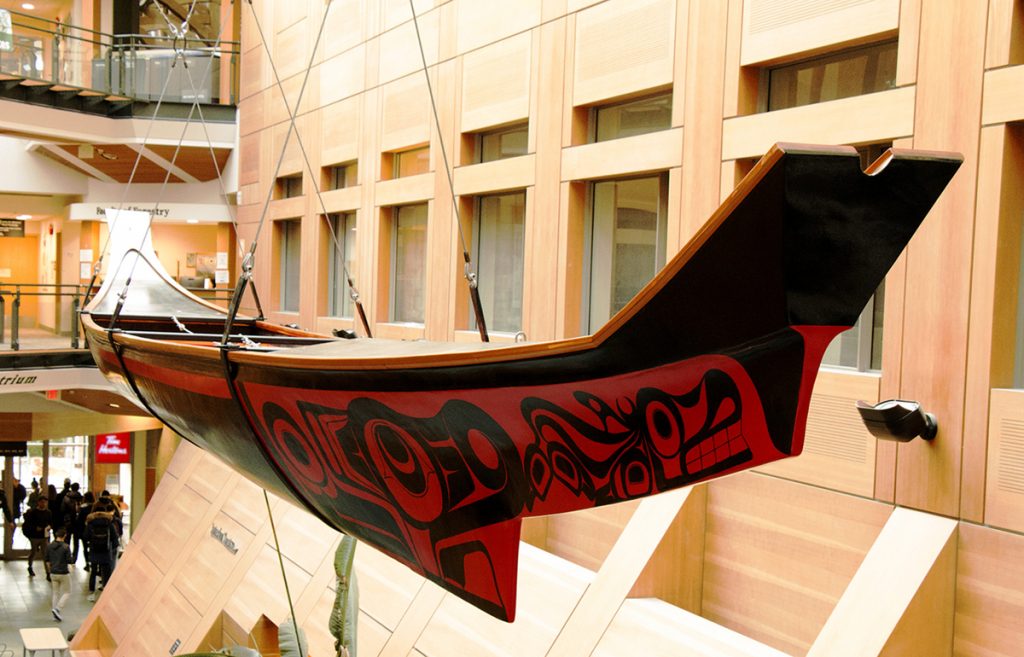 The Looplex X, one of four fibreglass replicas of Bill Reid’s famous cedar Lootas canoe, has now been restored and installed in the Forest Science Centre. Photo: Kevin Ward (click to enlarge)

November 24, 2016 – The Haida Looplex X canoe was recently installed in the UBC Faculty of Forestry’s Forest Sciences Centre atrium. The installation was formally announced during a ceremony for the event. The canoe is one of four fibreglass replicas of the famous “Lootas” (or “wave-eater”), a traditional Haida canoe, carved by the late Bill Reid and a team Haida carvers from a single red cedar log using traditional building methods for the 1986 World’s Fair in Vancouver.

The history of how the canoe came to hang in the Forest Sciences Centre starts in 2011, when the Looplex X was graciously donated by Dr. Martine J. Reid and Don Martin to the University of British Columbia‘s First Nation House of Leaning. However, after years in drydock, it was in dire need of restoration. Its hull was cracked in numerous places and much of its wood warped, broken, or rotting, and the original artwork was gone.

A young man living in Skidegate has a very mean mother-in-law that constantly belittles him. One day he decides to capture the Wasgo, a powerful half wolf, half orca creature that lives in an inlet near the village, and take its powers. Wearing the Wasgo skin, he swims in the ocean at night and captures fish and other creatures to bring back and leave for his mother-in-law to find on the beach. The mother-in-law believes she has gained special powers and uses these gifts to pursue higher status in the village. Because the young man is secretly hunting all night, when he gets back to the village he sleeps all day, so the mother-in-law calls him lazy and ridicules him even more. One night the young man tries to bring back two orcas and dies of exhaustion on the beach as he returns. His distraught wife, who has known his secret all long, opens the Wasgo’s mouth to reveal her husband’s identity to the entire village. The mother-in-law realizes the truth behind her newfound powers and status and dies of shame.

Given this situation, Debra Martel, associate director of the First Nation House of Learning and Professor Rob Kozak with UBC Faculty of Forestry, and Head of the Department of Wood Sciences, created a partnership through which the canoe would be restored at the Centre For Advanced Wood Processing. 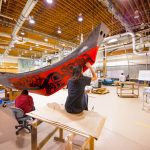 Before the work began, however, Musqueam community members cleansed the canoe, clearing the way for it be on Musqueam territory and for the work to begin.

In turn, Hereditary Haida Chief and renown artist James Hart agreed to guide a group of young Haida artists in the canoe’s restoration, which began in 2012.

John Brent Bennett and Brandon Brown, two of James Hart’s apprentices, began by fixing the damaged hull and preparing it for painting, while Lawrence Günther at the UBC Centre for Advanced Wood Processing led the woodworking.

Since there were no pictures of the original canoe in its entirety, a composite image was compiled from partial photographs from the Bill Reid Gallery. This composit guided the restoration. Mary Hart, Carl Hart, and Brandon Brown used it to trace the outline of the Wasgo on the canoe.

The restoration took place over three years and was completed in 2015. 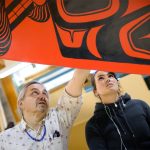 The restoration and display of Looplex X signifies a strengthening relationship between the Faculty of Forestry and First Nations communities.

Moreover, says Linc Kesler, director of the First Nations House of Learning, “it will, for all who see it, be a living reminder of the persistence of Haida and Aboriginal culture and of Bill Reid’s legacy. For Aboriginal students and youth, it will be a recognition of Indigenous presence at the university, and will generate excitement, pride, and encouragement to succeed.”

Thanks to Faculty of Forestry graduate Sean King for tracking this project during his time on campus and compiling much of the information for this article. 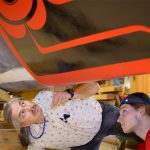 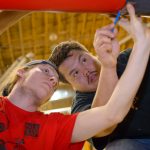 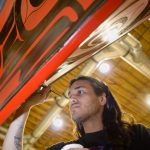 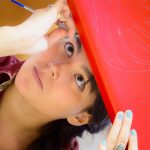 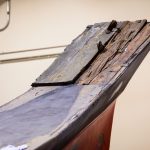 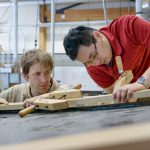 Lawrence Gunther and Vincent Leung, from the Centre for Advanced Wood Processing, do wood restoration on the Looplex X. Photo: Don Erhardt (click to enlarge)