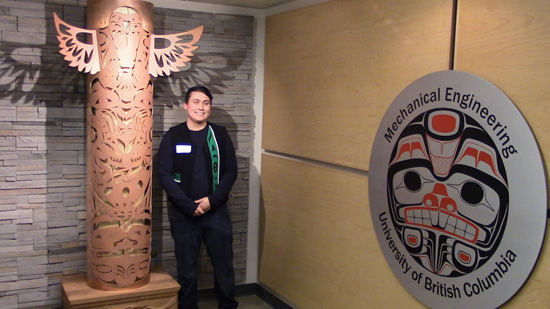 Squamish artist James Harry at the raising of his pole at the UBC Department of Mechanical Engineering.

April 15, 2016 – For the past three years, visitors to UBC’s Mechanical Engineering department have been greeted by Eena, the beaver in the department’s crest that hangs just outside reception. Now Eena is joined by several new faces, who both welcome us and share with us a story about a great artist, colleague, and friend.

On February 22nd, 2016, members of the UBC Mechanical Engineering department, the Musqueam Nation, the Squamish Nation, the Kwagiutl Nation, and the First Nations House of Learning joined together to celebrate the installation of a new artwork—a six-foot tall, cedar and copper totem pole. The pole was created by local First Nations artist James Harry of the Squamish and Kwakwaka’wakw Nations, and commissioned by the department in memory of the late Alan Steeves.

Steeves was of mixed Kwagiutl and European ancestry and, in addition to being an engineer, was himself a talented and prolific artist prior to his death in November 2014. He had been part of the Mechanical Engineering department for over forty years, first as an undergraduate student, then as a Master’s student, and finally as the department’s IT manager—a post he held for over thirty-five years. Department Head Sheldon Green described him as being not only “unmatched in his technical skills” and in his “tremendous service ethic and kind spirit,” but also as “a first class Aboriginal artist.”

“His artwork holds a place of honour in my home, in this atrium, and elsewhere at UBC,” Green said at the unveiling ceremony. Indeed, it was Steeves who designed and created the aforementioned department crest featuring the face of Eena, the Chinook word for beaver, and Green explained that the pole was originally meant to be Steeves’ project as well. Green narrated the story of the pole’s creation to those in attendance at the event: 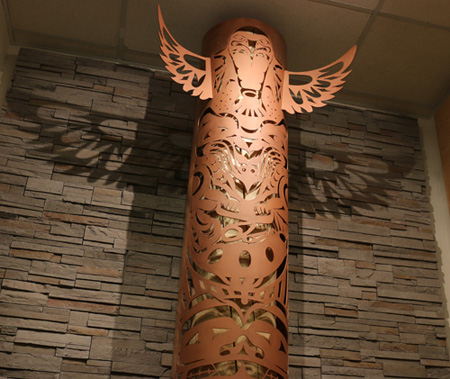 About 18 months ago I commissioned Alan to create a second piece for the Department. My vision was to have a pole that would welcome visitors and be emblematic of the inclusiveness of Mechanical Engineering. My only request was that the pole include elements of the sea, land, and air, to represent the fact that Mechanical Engineering is impactful in all three domains. Alan built on this rudimentary framework to create a sketch of the artwork he envisioned. Alan imagined a unique totem pole perched on a stacked pair of bentwood boxes. The pole itself would be fabricated by water-jet-cutting patterns into a thin copper sheet, and bending the sheet around a cedar pole. He selected figures for the pole that would be at home in the sea, on land, and in the air.

Following Alan’s untimely passing [just 2 months after the pole was commissioned] I decided that the artwork Alan had sketched should be completed, and would become a tribute pole to recognize Alan’s many impacts on Mechanical Engineering. I sought guidance from Don Fiddler, District Principal for Aboriginal Education of the Vancouver School Board, about artists who could fulfill Alan’s vision. Don kindly introduced me to James Harry, an artist from the Squamish Nation who has experience creating art from rolled sheet metal. Over the course of the last year James has worked, with some assistance from Erik Wilson of my Department, to create the artwork we will see shortly. [… ] James has respectfully expanded on Alan’s vision to create a work that combines elements of his and Alan’s Indigenous traditions, and modern fabrication techniques. James has created a work of beauty—it is a work that illustrates what we can accomplish when we work in harmony.

Building on Steeves’ preliminary sketch, Harry created his own design, which was digitized and water-jet cut into a copper sheet. Harry then hand-carved a yellow cedar log into a cylinder shape, and had the copper sheet machine-rolled to fit around it. “First Nations artists are adapting to new ways of doing art,” Harry said in an interview: “Copper is a significant material to local First Nations communities. Traditionally, it was one of the most valued objects and only chiefs had it. The use of cedar also pays respect to our traditions. I wanted to use the materials in a new way to create a modern concept of a welcome figure.”

The pole displays four figures, which Green said represent many of the core values of Mechanical Engineering: Beaver, who is at home both on land and in water, and who is known for her respect for nature and her protection of the people; Salmon, symbolic of life and abundance; Wolf, known for intelligence and a strong sense of family; and finally Hummingbird, at home both on land and in the air, and the universal totem, symbolizing that Mechanical Engineering welcomes all people. Harry added that “Hummingbird is a symbol of a messenger between worlds. Local First Nations communities talk about supernatural beings being able to communicate with the past, present and future. The wings symbolize this going between worlds.” 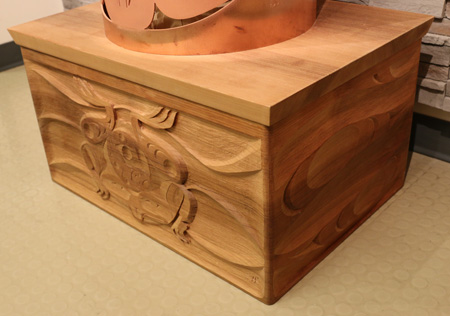 The bentwood box on which the pole sits (which Harry explained is not an actual bentwood box because it is sealed on the sides) was built by one of the department’s Machine Shop technicians, Erik Wilson, and carved by Harry. The carving on the front shows a frog, salmon, and egg, which Harry said represents rebirth, broadly, and Alan’s death specifically. “We [local First Nations communities] don’t believe that when somebody dies, they’re gone forever,” he said; “they are reincarnated into another animal.” On the back of the box is the Coast Salish eye, a symbol, according to Harry, “that we’re always being watched over by a greater force in the world, a greater being.” In keeping with this theme of bridging past and future, the department has placed a time capsule inside the box, to be opened fifty years in the future.

The pole is a symbol of collaboration. It incorporates elements of traditional Squamish, Kwagiutl, and Kwakwaka’wakw art forms and materials; the artistic visions of artists here and gone; the values of the Mechanical Engineering department; and the production methods of engineers, machinists, and traditional First Nations artists.

For Harry, bringing together different traditions and materials is not uncommon for contemporary First Nations art. “First Nations art was almost lost,” he said, “there was a lot of confusion even in local communities [regarding where different types of artwork originated]. Current First Nations artists are amalgamating different designs to create their own new style.”

In addition to the collaboration within the pole’s production, its unveiling was also a collaborative event. The unveiling ceremony opened with a welcome to the Musqueam territory in the native language by Larry Grant, Elder in Residence of the First Nations House of Learning. This was followed by a witnessing ceremony.

“Whenever we have an important event like raising of artwork,” Harry explained, “we bring people together and pay them 50 cents—representing the cost of a blanket, as we traditionally paid people with blankets—to remember what happened that day, and to come and speak about it if they are ever called forward in the future to retell the story.”

The department hopes that this story will be remembered for many years, and that the pole that welcomes visitors to the department will remind them of the department’s commitment to fostering a community of collaboration and inclusiveness.

Dr. Green ended his speech with the following words regarding Canada’s past and the department’s plans for the future:

At all major events at UBC we recite the words that UBC is located on the traditional, ancestral, unceded territory of the Musqueam people. What do these words mean? What they mean is that the colonial governments systematically pushed First Nations off their land. Not satisfied with just stealing First Nations land, the government, with the complicity of some churches, attempted to expunge First Nations cultures by forcing young Indigenous children to attend residential schools. The treatment of children at those schools was racist, dehumanizing, and despicable. I believe that the government’s treatment of the Indigenous peoples is the single greatest stain on our history.

As a sign of our commitment to treating Aboriginal communities respectfully, last year the Department set the goal of raising funds to endow in perpetuity an award named after Alan. I am pleased to report that those funds have been raised and the Alan Steeves Memorial Award will be used to help Indigenous students studying in Mechanical Engineering.

The Department has also committed to a ten-year plan of outreach to local First Nations communities, with the goal of encouraging young Aboriginal students to consider a career in Engineering. We look forward to welcoming many more Indigenous students.

Finally, there is this tribute pole. If the presence of the pole makes even one Aboriginal student feel more welcome, or makes one non-Aboriginal student think about our history, it will have served its purpose.

Linc Kelser praised both the artwork and Dr. Green’s remarks, adding: “We are often asked whether things like the acknowledgement of Musqueam territory at events, or the beautiful carvings found on campus are perfunctory or have deeper meaning. As Dr. Green’s statement so clearly indicates, Mr. Harry’s beautiful artwork stands for a deeper set of relationships and commitments. People who were at the ceremony or read the plaques adjacent to the work will be reminded of them each time they experience the beauty of the work.”