Unveiling of Artwork in Honour of Alan Steeves

March 15, 2016 – The following remarks were prepared by Professor Sheldon Green, Head of the Department of Mechanical Engineering, for the February 22nd unveiling of a tribute pole by Squamish artist James Harry in honour of the late Alan Steeves.

Good afternoon. I am Sheldon Green, the Head of Mechanical Engineering. Larry, thank you for your warm welcome to Musqueam territory. I would personally like to thank the following people for attending this afternoon: Wayne Sparrow, Chief of the Musqueam Nation; Kerry Steeves, brother of Alan Steeves, and his family. We are here today to witness the unveiling of artwork created in honour of our former colleague and friend, Alan Steeves. Alan’s association with UBC began more than 40 years ago, when he joined the department as an undergraduate student. After completing his B.A.Sc. and M.A.Sc., Alan segued from being a student in the department to being its IT manager. He remained responsible for IT in MECH for over 35 years, beginning in 1979.

Alan was no ordinary IT manager – he was, in a word, exceptional. His technical skills were unmatched, but it was really his tremendous service ethic and kind spirit that won the hearts of everyone with whom he interacted. Alan was a recipient in 2009 of UBC’s highest award for service by a staff member, the President’s Service Award for Excellence. He also won major external awards for service.

Alan was of mixed First Nations and European ancestry, and took pride in his Aboriginal heritage. I will speak in a moment about Alan’s artwork, but let me start by relating an anecdote that touches on Alan’s heritage and character. A few years ago my partner was approached by a couple who had just adopted a First Nations child. The couple wanted the child to feel connected to its heritage and sought advice from my partner, who in turn sought advice from Alan. Alan determined that the child’s mother belongs to the Frog Clan of the Gitxsan people, and therefore the child too is a member of that Clan. Alan created a frog print to hang in the bedroom of the child. For most of us, this would already represent a tremendous kindness on behalf of people he barely knew. But, for Alan, this was just the start. Alan wanted to maximize the health of the new family, so he travelled to Kispiox and had First Nations elders in that community give their blessing to the print and the adoption.

Alan was a first class Aboriginal artist whose work exists in collections around the world. The Mechanical Engineering crest that proudly adorns the entrance to the Department was created by Alan, as was Eena, the major work displayed in the Faculty Office. Alan also created works for numerous other groups and individuals. His artwork holds a place of honour in my home, in this atrium, and elsewhere at UBC.

About 18 months ago I commissioned Alan to create a second piece for the Department. My vision was to have a pole that would welcome visitors and be emblematic of the inclusiveness of Mechanical Engineering. My only request was that the pole include elements of the sea, land, and air, to represent the fact that Mechanical Engineering is impactful in all three domains.

Alan built on this rudimentary framework to create a sketch of the artwork he envisioned. Alan imagined a unique totem pole perched on a stacked pair of bentwood boxes. The pole itself would be fabricated by water-jet-cutting patterns into a thin copper sheet, and bending the sheet around a cedar pole. He selected figures for the pole that would be at home in the sea, on land, and in the air. 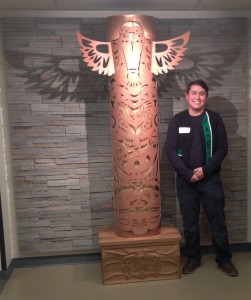 Squamish artist James Harry at the raising of his pole at the UBC Department of Mechanical Engineering.

Following Alan’s untimely passing I decided that the artwork Alan had sketched should be completed, and would become a tribute pole to recognize Alan’s many impacts on Mechanical Engineering. I sought guidance from Don Fiddler, District Principal for Aboriginal Education of the Vancouver School Board, about artists who could fulfill Alan’s vision. Don kindly introduced me to James Harry, an artist from the Squamish Nation who has experience creating art from rolled sheet metal. Over the course of the last year James has worked, with some assistance from Erik Wilson of my Department, to create the artwork we will see shortly. I would like to thank particularly James, but also Erik, for their efforts to create this beautiful piece.

Before I invite James to talk about his artwork, I would like to say a few words about my understanding of Indigenous history. At all major events at UBC we recite the words that UBC is located on the traditional, ancestral, unceded territory of the Musqueam people. What do these words mean? What they mean is that the colonial governments systematically pushed First Nations off their land. Not satisfied with just stealing First Nations land, the government, with the complicity of some churches, attempted to expunge First Nations cultures by forcing young Indigenous children to attend residential schools. The treatment of children at those schools was racist, dehumanizing, and despicable. I believe that the government’s treatment of the Indigenous peoples is the single greatest stain on our history.

As a sign of our commitment to treating Aboriginal communities respectfully, last year the Department set the goal of raising funds to endow in perpetuity an award named after Alan. I am pleased to report that those funds have been raised and the Alan Steeves Memorial Award will be used to help Indigenous students studying in Mechanical Engineering.

The Department has also committed to a 10 year plan of outreach to local First Nations communities, with the goal of encouraging young Aboriginal students to consider a career in Engineering. We look forward to welcoming many more Indigenous students.

Finally, there is this tribute pole. If the presence of the pole makes even one Aboriginal student feel more welcome, or makes one non-Aboriginal student think about our history, it will have served its purpose. Thank you Alan for giving us this one final gift.

While I am giving thanks, I would also like to thank Leona Sparrow, of the Musqueam Nation; Linc Kesler, of the First Nations House of Learning; and Jennifer Pelletier of my office for their assistance in organizing today’s event.

It is my pleasure now to introduce James Harry, the artist who brought Alan’s vision to life. I first met James at a coffee shop near Emily Carr University. At the time I was struck by James’ winning personality, keen eye for beauty, openness to new ideas, and eagerness to work with the Department. In the time since that first encounter I have met with James many times, and on each occasion I can see those initial impressions were accurate. As you will see shortly, James has respectfully expanded on Alan’s vision to create a work that combines elements of his and Alan’s Indigenous traditions, and modern fabrication techniques. James has created a work of beauty – it is a work that illustrates what we can accomplish when we work in harmony.

James, I truly appreciate your willingness to share and celebrate your heritage. I have very much enjoyed working with you and I invite you to talk about the artwork you have created.