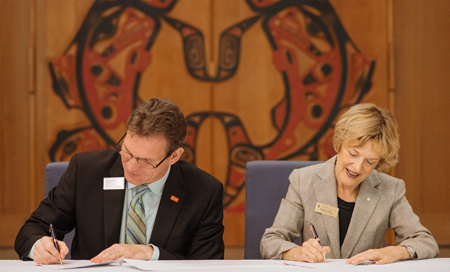 The UBC-Langara Aboriginal Transfer Program began three years ago as a pilot project, but will now become a lasting agreement. It helps First Nations, Metis and Inuit students access university education by overcoming barriers to entry.

The formalized agreement between the two institutions gives Aboriginal students the option to transfer into a wider variety of UBC faculties and aims to increase the number of students who transfer each year. It also eases the coordination of student services and supports, including the allocation of scholarships and bursaries worth $10,000 per year at Langara and $20,500 per year at UBC.

To transfer to UBC, students first complete 24 to 60 credits at Langara College. Admission to UBC is guaranteed for those who complete the required credits and maintain a minimum grade point average.

Students have access to Aboriginal-centred student services and facilities at both institutions and UBC advisors drop in to Langara’s Gathering Space to provide academic guidance.

During the pilot project phase, students could transfer to pursue bachelor of arts degrees, and later on into science and commerce degrees, but will now also be able to transfer into degree programs in applied science, forestry and land and food systems if they meet the program-specific requirements. 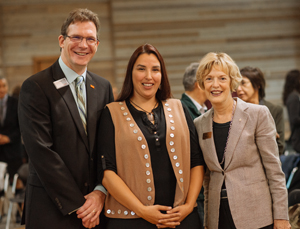 Linc Kesler, director of UBC’s First Nations House of Learning and senior advisor to the president

“The UBC-Langara Aboriginal Transfer Program helps to address the educational inequality that exists between Aboriginal and non-Aboriginal people in Canada,” said Linc Kesler, director of UBC’s First Nations House of Learning, whose indigenous ancestry is Oglala-Lakota from the Pine Ridge reservation in South Dakota. “This program offers another proven path for the many talented and hardworking Aboriginal students who begin at Langara to pursue a degree at UBC, and have financial support to realize their academic potential.”

“We are pleased to play a role in supporting more Aboriginal students in achieving their educational and career goals, and welcome the important perspectives these students bring to our classrooms,” said Clayton Munro, dean, student services and registrar at Langara College and citizen of the Metis Nation of B.C.

UBC has a long-standing commitment to Aboriginal engagement, a key component of “Place and Promise”, the university’s strategic plan.

UBC recognizes its Vancouver and Kelowna campuses are situated on the traditional, ancestral and unceded territories of the Musqueam First Nation and Okanagan Nation.

Frank Calder was the first status Indian to graduate from UBC in 1946. Over the past century, UBC is proud to have graduated more than 300,000 students who are making positive changes at home and abroad. Find out more about UBC’s 100th anniversary at ubc100.ca

In 2004, Langara College was a leader among post-secondary institutions in B.C. in passing a formal Aboriginal education policy, with an aim to increase the enrolment and academic success of Aboriginal students. Its commitment to these efforts was affirmed in its new academic plan, which includes Aboriginal initiatives among the institution’s key priorities.

Langara provides a number of support services for Aboriginal students, including orientation, counseling, advocacy, and liaison services. The Gathering Space offers Aboriginal students at Langara a place to connect with each other and Elder-in-Residence, Gail Sparrow, a former Chief of the Musqueam Nation.

Langara College is located within the unceded, traditional territory of the Musqueam First Nation. The College’s coat of arms recognizes this through the incorporation of a base of river grass, “Musqueam” meaning “People of the River Grass.” Langara’s connection with the Musqueam was further strengthened in June of 2014 when Musqueam Elder Shane Point blessed the college’s third president and CEO, Lane Trotter, with the Musqueam name Takaya, which means wolf.