Aboriginal husband and wife duo take on academia together 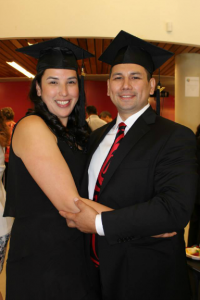 Nicole and Chris Cardinal at their college graduation

September 25, 2015 – Newlyweds Nicole and Chris Cardinal are used to doing things together.

They graduated from high school together, and then from college. Now, they’re attending university together, both majoring in First Nations and Indigenous Studies at the University of British Columbia.

The couple transferred from Langara to UBC last year. They’re among some of the first students to take part in the UBC-Langara Aboriginal Transfer Program, a newly formalized partnership that improves access to university education for Aboriginal students.

For Nicole, 39, coming to UBC as a mature student is a notable feat after years of hard work. Before pursuing a degree, Nicole was a single mother to a young daughter. She worked a series of jobs, in sales and for a now-defunct airline.

But inspired by her daughter, now 8, Nicole started taking courses at Vancouver Community College. She reunited with Chris, 38, who she had met in high school in East Vancouver. The pair began to date and Nicole’s daughter quickly adopted Chris as her father. With their support, she enrolled full-time at Langara in 2009. Nicole and Chris had a daughter together, now 4, and legally married in December 2014 at UBC’s First Nations Longhouse, a home away from home for Aboriginal students.

Nicole found strength and stability with her family and through reconnecting with her Dakelh heritage. “Over the past few years, I’ve learned more about what it means to be an Aboriginal woman, and I feel empowered by it,” she said.

Six years ago, Nicole took up pow wow dancing and jewelry making. Both activities are a source of pride, carrying over into her life at UBC. This past year she led beading workshops on campus. “I am decolonizing my life with every bead I string together,” she said.

Nicole, from the Stellat’en First Nation in Stellaquo, B.C., and Chris, from the Saddle Lake Cree Nation in Alberta, both started their second year at UBC this month, successfully managing schoolwork with their parental responsibilities, all the while maintaining a happy marriage.

“People ask us all the time how we’re managing to ‘do it all’ and the answer is we don’t know. We just do,” said Chris, who left a career in masonry to go to school. “We sacrifice family time for study time, but Nicole and I both know going to UBC together will only make our family stronger in the long run.”

Initially overwhelmed by the size of UBC, the Cardinals say they’ve now found their footing, becoming a part of the vibrant Aboriginal community on campus.

“Coming to UBC as part of the transfer program has been life changing,” said Nicole. “I’m grateful to be able to do this with my husband and family by my side. I don’t know what’s waiting for me after graduation, but I know it will be something beautiful.”

Nicole and Chris are expected to graduate from UBC in 2017.