Geering Up brings engineering and science fun to Musqueam

By Faculty of Applied Science on August 6, 2015 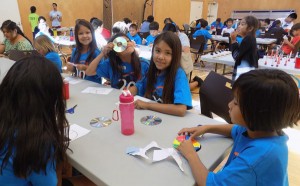 Musqueam youth learn about light and colour at a Geering Up camp.
Photo: Geering Up

August 6, 2015 – A full week of exciting engineering and science lessons was on the schedule for 45 kids and youth in the Musqueam community. Geering Up, UBC Engineering’s summer camp, brought more than a dozen hands-on activities, such as designing forts, building snap circuits and extracting DNA from strawberries, to eager participants in Grades 1 to 7, from July 13-17.

Through each activity, Geering Up instructors, who are UBC students, teach engineering and science by getting campers to build and perform experiments – all while having fun.

“Geering Up is an amazing opportunity for both instructors and students. Watching a kid’s eyes light up as they figure out how to make a robot work, dissect a cow’s eye, or launch their own pressure rocket, is an experience you never forget,” says Jeanie Malone, Geering Up’s co-director.

Thanks to the help of the UBC Mechanical Engineering department, the camp was for the first time able to deliver their interactive STEM (Science, Technology, Engineering and Math) educational experiences to Musqueam kids and youth, free of charge. The department plans to lend their support again next year.

“We sponsor such activities because we strongly believe that it would benefit the department and the university if we had more, qualified Musqueam young adults among our students. Based on the positive response to Geering Up, it appears that Musqueam youth share our enthusiasm for the engineering and science profession!” says Sheldon Green, Mechanical Engineering department head.

Malone adds, “We’re excited to be able to work with the Musqueam people, and we hope to be able to share more science and engineering with the community next summer.”

Since starting 20 years ago, Geering Up has served more than 90,000 kids and youth in BC. The camp recently received $29,800 in funding from the Natural Sciences and Engineering Research Council of Canada (NSERC) to expand their non-profit outreach to Prince George, Kelowna and inner-city Vancouver. Geering Up strives to reach all children and youth, regardless of gender, ethnicity, culture or socio-economic status, with special outreach for those groups traditionally underrepresented in the sciences. Geering Up hosts after-school clubs in the spring and fall, in-school workshops in May and June, and summer camps in July and August.

Learn more about Geering Up at www.geeringup.apsc.ubc.ca.

This story is reprinted with permission.