June 5, 2015 – Sowing a seed, and nurturing something special—Professor Emeritus Michael Jackson, QC, used this imagery to capture the foundation of the Indigenous Legal Studies Program (ILSP) at the Peter A. Allard School of Law 45 years ago. On Thursday May 14th, the Allard School of Law celebrated 35 years of the ILSP and 20 years of the Indigenous Community Legal Clinic (ICLC). 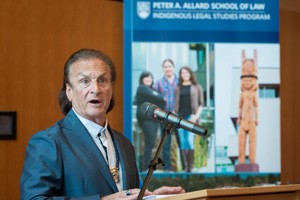 One of the founding faculty members of the ILSP, Professor Jackson noted that when he first offered a course in “Native Law” in the 1970s, there were no Indigenous scholars in the law school and only a single Indigenous law student. Ten years later, what had begun as one course had grown into a broader program. In 1995, as fellow keynote speaker and former Allard School of Law Dean Lynn Smith, QC, recalled, the First Nations Legal Clinic (as it was then called) was established as part of a broader expansion in clinical education within the law school. Recently renamed, it remains a strong feature of the Allard School of Law’s ongoing commitment to the Indigenous community and to Indigenous legal studies.

The anniversary event, as well as an opportunity to celebrate Indigenous knowledge and traditions, recognized the many individuals and groups that demonstrated commitment to both the ILSP and the ICLC over the years. Elder Jewel Thomas gave a Musqueam welcome, with the Eagle Song Dancers performing songs conveying the history of the Coast Salish people and Indigenous legal knowledge and customs.

Many alumni attended the event, including Leona Sparrow, Director of Treaties at the Musqueam Indian Band, and Sam Stevens, the ILSP’s first administrator. Representatives from law firms such as Mandell Pinder LLP and Fasken Martineau DuMoulin, who have been strong supporters of the ILSP and ILSA, also attended. 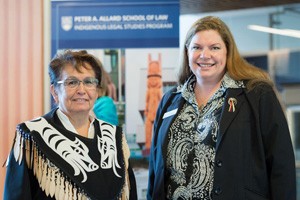 Finally, the ILSA students made a special presentation to Dean Mary Anne Bobinski, recognizing her with a “Distinguished Courage in Law Award,” presented by students Stephen Mussell and Jessica Buffalo in recognition of the support she has given both the ILSP and the ICLC during her twelve year tenure as Dean.

Two significant additions to ILSP programming were launched last year: the Specialization in Aboriginal Law with the JD program, and the Inaugural Indigenous Awareness Camp. This is also the third year in which JD students are required to take a dedicated course in Aboriginal and Treaty Rights in the first year curriculum.

Located in the Downtown Eastside, the ICLC provides free legal services to the Indigenous community and an important opportunity for Allard Law students to enhance their legal education with practical hands-on experience managing client files and making court appearances under the supervision of the ICLC’s two supervising lawyers. Involving students in work with Indigenous peoples in a historically underserved and marginalized community, the ICLC also exposes students to advocacy and social justice work.

Reprinted with permission. The original article can be found here.