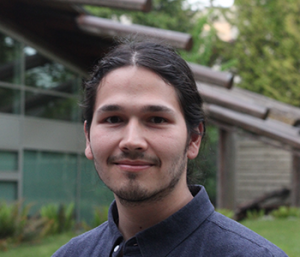 May 14, 2015 – Growing up, Ryan Tomm didn’t know he would be a scientist one day. It was a series of decisions that led him on his eventual path to study and do research at UBC. His research explores the effects of aging on decision-making, executive functions and cognitive flexibility.

“I was a First Nations education worker and I thought I’d be pursuing counselling psychology or clinical psychology,” says Tomm, BA ‘15 (Psychology). “But a Brain and Behaviour course changed my way of thinking. I became fascinated with neuroscience and I transitioned into this area of study and research.”

Armed with an NSERC grant, he now performs research in professors Kiran Soma and Stan Floresco‘s labs as part of UBC’s Directed Studies program. This award has allowed him to do research in the summer and to understand the research process; something he passes on to other students. Ryan has hosted workshops with the Indigenous Students Association at UBC to discuss the application process for NSERC Undergraduate Summer Research Awards and the important role research plays if considering graduate studies.

Naturally curious and with a passion for helping Aboriginal teens, he uses his own life choices as examples for communicating his science. He also received an NSERC Aboriginal Ambassadors in the Natural Sciences and Engineering award in 2014 and used this funding to do outreach with Aboriginal teens.

“My heart is with First Nations teens and youth in Canada. I was one of them sitting in the classroom,” says Ryan. “I share the same background and I know their experience first hand. Science isn’t typically emphasized.”

He recently travelled to Bella Coola, B.C. and to his hometown of Kamloops, B.C. to present to high school students – and to show them how science can be fun. During his presentations, he outlines the different decisions he’s made in life and relates it back to science and his research on decision-making and attention. He shows the students his own report cards and discusses his academic struggles and history.

“My hope is I’ve inspired the students and they realize science isn’t as difficult as they might think,” says Tomm. ”We talk about the decisions I’ve made and I show them how paying attention to different things in life can make a difference in their decision making – and in their lives.”

The road to research

“I feel there is a need to have more Aboriginal ambassadors in science. I emphasize how important research experience is when applying for graduate school. Even if you’re not going on to graduate school, it helps your CV.”

Tomm has been actively involved at UBC’s First Nations Longhouse and with other Aboriginal groups at UBC. He helped coordinate Tuesday Lunches, a weekly tradition that brings together members of the UBC community to have conversations about Aboriginal culture and history. He served as Vice-President of the Indigenous Students Association in 2013 and now sits on a committee to explore increasing First Nations involvement in health careers.

Ryan attributes his success at UBC to the availability of courses with First Nations content, including First Nations and Indigenous Studies and First Nations Language. “These classes gave me a feeling of community away from home,” says Ryan. “I hope UBC will continue to expand and support Aboriginal students in this way.”

When not conducting research, studying, or volunteering, Ryan plays guitar as a means of stress relief. He writes his own music and re-wrote a Mumford and Sons song into his own version in the Cree language for a class project.

Ryan will attend a graduation ceremony for Aboriginal students at UBC’s First Nations Longhouse on May 23, 2015. Recently accepted into the MA program in Behavioural Neuroscience, he’ll be continuing his scientific studies and research in UBC’s Department of Psychology. He’s hoping to pursue his PhD in order to have a good foundation in neuroscience and research, and he plans to use his knowledge to help shape policies related to mental health in the Aboriginal community.

This story has been reprinted with permission. It has been slightly edited. See the original here.