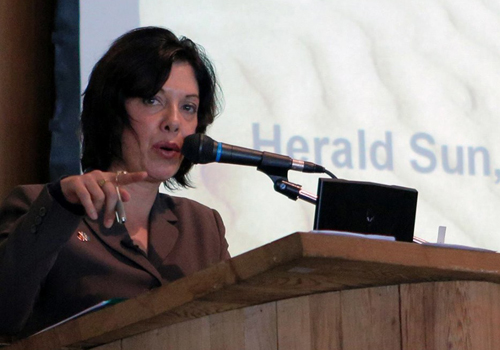 Michelle Aleksandrovics Lovegrove, from the Ngarrindjeri Nation in South Australia, spent 10 days at the UBC Journalism school this past February.

April 16, 2015 – Students at the j-school learned first-hand what it’s like to work with indigenous peoples from around the world.

Michelle Aleksandrovics Lovegrove, from the Ngarrindjeri Nation in South Australia, spent 10 days at the school this past February as one of this year’s Canwest Visiting Professors.

Each year the j-school brings one or more professional journalists into the classroom to share their expertise, made possible by an endowment from Canwest Global Communications Corp. The Canwest visiting professors provide students with an opportunity to learn specialized skills from journalists from all over the world.

During her time at the j-school, Lovegrove visited several classes, including Reporting in Indigenous Communities, Integrated Journalism, Musqueam 101 (held on the Musqueam Indian Band reserve) and Journalism 100.

“Michelle has a great sense of humour and is a great storyteller,” said professor Duncan McCue who teaches Reporting in Indigenous Communities.

“I found that the students were really drawn into the wealth of experience that she was able to share about working with indigenous people in Australia. And there were some really obvious parallels and similarities to what the students are experiencing when working with First Nations here in Canada.”

During her stay in Vancouver Lovegrove gave a public lecture titled, “But You Don’t Look Aboriginal.”

The talk was co-sponsored by the School of Journalism and the First Nations and Indigenous Studies Program and was held at the Sty-Wet Tan Hall First Nations Longhouse.

Lovegrove spoke about discrimination, identity and the mainstream Australian view of an “authentic Aborigine.”

“Having Michelle in the program was an incredibly enlightening experience,” said Mendoza. “I didn’t know much about Australia’s history of treating indigenous peoples before, and having the chance to interview Michelle introduced me to that whole world.”

This article is reprinted with permission from the UBC Graduate School of Journalism. The original article can be found here.