VANCOUVER – A new study by The Cedar Project is the first in Canada to show that survivors of sexual abuse and children of residential school survivors are at disproportionately higher risk of sexual assault. The study aimed to identify risk factors for sexual assault among young Aboriginal women who use drugs.

The Cedar Project is a partnership between Indigenous leaders and health researchers to examine vulnerability to HIV among Indigenous people who use drugs in Prince George and Vancouver. The findings from this study, recently published in the journal Violence Against Women, point to alarming patterns of historical trauma, childhood sexual abuse, and vulnerability to sexual assault among at-risk Aboriginal young women in British Columbia.

Researchers with the University of British Columbia School of Population and Public Health and the Centre for Health Evaluation and Outcome Sciences (CHÉOS) followed a group of 259 young Aboriginal women who use drugs (aged 14–30) in Vancouver and Prince George over a seven-year period.

During the seven-year study period, 28 per cent of participants reported that they were sexually assaulted, and of those, 41 per cent were assaulted more than once.

The study also found that only 20 per cent of those assaulted received any type of counselling. 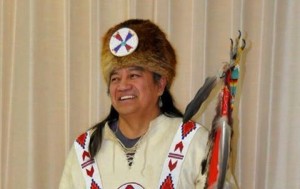 Kukpi7 (Chief) Wayne Christian (Splatsin Secwepemc Nation) and other Indigenous leaders in British Columbia are calling for an integrated and trauma-informed response to addressing childhood sexual abuse and sexual violence in their communities.

“We honour our Elders who endured the trauma of residential schools, their sacrifices, courage, and determination to cope and survive for those yet unborn,” said Kukpi7 Christian, who is also co-Principal Investigator of The Cedar Project. “However, these statistics are more than just numbers. They are our children, our relations. Some are being hurt this way before they can even speak. I myself am a survivor of multiple forms of trauma. I have walked the pain of these young people and they are calling for change. We need to stop this cycle. We’ve lived in denial for long enough and it’s high time for a response.”

The centre would bring together a multi-disciplinary team of police, child protection, medical, mental health, and victim services in a child-friendly setting for a young victim or witness and his or her family.

“How many more children will we lose to sex work, the streets, violence, and injection drug use before our Nations come together to address the pain and silence surrounding sexual abuse and begin rebuilding our communities?” asked Guno.

“Sexual abuse may indeed be the greatest threat to the lives of our young people,“ said Kennedy. “We need to change the question from, ‘What’s wrong with you?’ to ‘What’s happened to you?’ The impacts of sexual abuse are killing our kids.”

“The Sheldon Kennedy Centre is a powerful example of strong partnerships, willing hearts, and experts who will ensure abused children and their families receive the coordinated and comprehensive help they require,” said Bonnie Johnston, CEO of the Sheldon Kennedy CAC. “With professionals working together in an integrated model of practice we are seeing improved outcomes for children and families and the opportunity to truly understand the impact of this trauma on our children.”

“Residential schools violated our belief that the world is a safe place and that people can be trusted. Most health and social programs that address the impact of substance use in our communities fail to acknowledge the historical and ongoing injustices faced by our people,” said Mary Teegee (Takla Lake First Nation), Executive Director of Family Services for Carrier Sekani Family Services in Prince George. “A young member of our community once said that he dreamt of one day when he can read about the impacts of residential school and not have to live it.”

Cedar Project research has repeatedly demonstrated relationships between historical traumas and negative health outcomes later in life, including HIV and hepatitis C infection” said Dr. Patricia Spittal, Principal Investigator of The Cedar Project and Professor in UBC’s School of Population and Public Health, Faculty of Medicine. “We have to support the children who are currently being hurt, and develop trauma-informed addictions care for young people who are still coping with the pain of sexual violence”.

To read the paper, please visit: http://vaw.sagepub.com/content/21/3/313.abstract or contact us for a copy.

Historical Trauma: Between 1874 and 1996, over 150,000 Aboriginal people were removed from their communities and placed into the Indian residential school system. Widespread atrocities were experienced in the schools, including sexual, physical, psychological, and emotional abuses and persistent devaluation of cultural identity and knowledges. Many former students struggled to cope with their experiences after they returned home and unintentionally transferred unaddressed grief and pain onto their families. Indigenous scholars refer to historical or intergenerational trauma as collective emotional and psychological injury over the lifespan and across generations.

Sexual Assault: Sexual assault refers to all incidents of unwanted sexual activity, including sexual attacks and sexual touching. In The Cedar Project study, researchers have found that within a seven-year study period, 28 per cent of the young women had been sexually assaulted, and that on average, 5 per cent were sexually assaulted every 6 months. Comparison with other studies can be problematic because of variations in definitions or terminology and time frames in which events are measured. However, the proportion of women in this study who had experienced at least one sexual assault within the seven-year study period is higher than the lifetime prevalence of rape among American Indian women from six Tribes in the United States (14 per cent), and lifetime prevalence of sexual assault among young American Indian women in a residential substance use treatment program in the United States (20 per cent).

Sexual Abuse: Childhood sexual abuse is a deeply injurious experience that has severe emotional, physical, mental, and spiritual impacts on an individual’s health over their life course. In the aftermath of the residential school system, it is now believed that Indigenous children are disproportionately impacted by sexual abuse. Almost half (48 per cent) of Cedar Project participants, of whom 69 per cent were young women, reported being forced to have sex or molested prior to enrolment in the study. The average age of first non-consensual sex was six years old. For those who reported a history of sexual abuse, 70 participants (27 per cent) had never told anyone about the experience prior to the baseline interview and 167 (65 per cent) had never received counselling that involved dealing with the abuse. Further, 121 (48 per cent) reported that since their first experience of sexual abuse, they have again experienced sexual abuse by other people.

Trauma-informed: Trauma-informed addictions and mental health services aim to neither exacerbate nor avoid addressing trauma. These services support survivors of trauma through trust based collaboration between service providers and clients. Emphasis is placed on supporting the control and choice of the person who is seeking help, enhancing their strengths and resilience, minimizing the possibilities of retraumatization, and ensuring cultural safety.

It blends investigation, treatment, prevention, education, and research with expertise to help young victims and their families through an exceptionally difficult time — providing integrated services at one place so healing can begin and lives can move forward. The Centre is currently working with Ministries within the Government of Alberta to develop a provincial integrated model of practice to ensure all children and youth impacted by child abuse have access to equitable and consistent specialized services. This includes our work with First Nations and the RCMP who serve rural communities. http://www.sheldonkennedycac.ca/

For a complete copy of the Cedar Project paper and to arrange interviews, please contact: