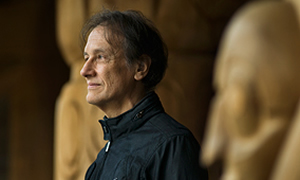 May 26, 2014 – In April, Dr. Kesler accepted the university’s offer to extend his term as Director of the First Nations House of Learning and Senior Advisor to the UBC President on Aboriginal Affairs, positions he has held since January 2009, to December 31, 2018.

In a letter to the UBC community announcing the news, David H. Farrar, Provost and Vice President Academic, said the President’s Advisory Committee tasked with considering his reappointment consulted widely, both internally and externally at both campuses, and was “delighted to received strong support for extending Dr. Kesler’s term for another five years.”

In explaining the process, he said the committee after carefully considering the feedback received from the community, met with Dr. Kesler to hear his reflections on the past five years and his vision and hopes for the next five, then unanimously recommended to President Toope to extend his appointment for another term, including “ways to support him to ensure his continued success.” To which, President Toope “fully concurred.”

Please join us in congratulating Dr. Kesler on his well-deserved reappointment.