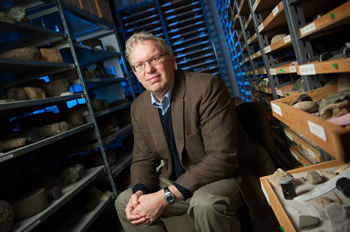 A massive piece of Aboriginal rock art, transported across the province nearly a century ago to reside in Vancouver, is finally heading home.

Adorned with carvings which may predate the arrival of Europeans in B.C., the rock art, or petroglyph, was a mainstay in Stanley Park’s collection of Northwest Coast artifacts, and more recently, resided at the Museum of Vancouver (MOV).

This week, thanks to a collaboration between the Stswecem’c Xgat’tem First Nation (formerly Canoe Creek Indian Band), the MOV and a team of UBC anthropologists, the five-ton boulder is set to travel more than 500 kilometers back to B.C.’s Interior, near Crow’s Bar, its original home on the shores of the Fraser River.

“Repatriating artifacts is a trend among progressive museums around the globe to improve their relationships with First Nations and to better engage and reflect the communities they serve,” says Bruce Miller, a professor of anthropology and chair of MOV’s collections committee. 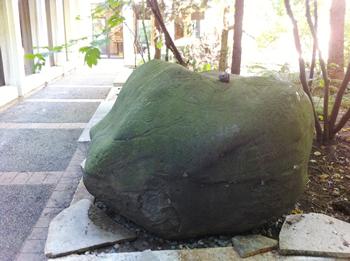 The Petroglyph at the Museum of Vancouver

While much of the rock’s story is a mystery, this much is known: in 1926, Vancouver park board commissioner Bill Shelley arranged to have the rock transported to Stanley Park after being tipped off by gold prospector H. S. Brown, who was staking claims in B.C.’s Interior.

Miller, who raised the topic of strategic repatriation projects with MOV’s staff shortly after joining its board in 2007, says the specifics of negotiations between Shelley and the First Nation, if any occurred, are unknown.

“This has been an exceptional learning experience for these students, which has really prepares them to be leaders in their field,” says Miller, who studies indigenous peoples, and their relationship with the state, including governments, the courts and museums. He has written six books on the Coast Salish people of B.C. and the Pacific Northwest.

On June 11, Miller and his graduate students will attend a private ceremony at the MOV with Vancouver’s mayor and representatives from the Stswecem’c Xgat’tem First Nation, Williams Lake and the Cariboo Regional District. On June 12, the petrogylph will leave Vancouver by truck, arriving in Churn Creek Protected Area, near Clinton, B.C., on June 13, where a public celebration will be held to honour its return.

This is the MOV’s third major repatriation project. Previous projects include the 2010 return of “The Sechelt image,” one of Canada’s best known prehistoric sculptures, to B.C.’s Sechelt Band, and a Maori cloak that was returned to New Zealand’s Wairoa Museum. According to Miller, the three pieces represent more than 4,000 years of human history.

Learn more about UBC Anthropology and the Museum of Vancouver.