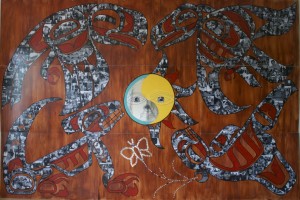 Jennifer Wolowic, PhD Candidate in the Interdisciplinary Graduate Studies Program at UBC, collaborated with sumaxs (the Sma’algyx word for young people) in Prince Rupert, British Columbia, for four years and created thousands of images of First Nations youth and their families. Many of these images have been used in the Sumaxs Affect mural, which is now hanging in the Green College Great Hall and will remain there until mid-February. Please note that Green College is a residential college and not a gallery space.

Twenty-year-old Kyle Wesley, Adiks Sim Gibuu, who lives in Prince Rupert designed the mural. He is from the house Kwaxsuu in the Nisga’a village of Gingolx and created the design under the mentorship of his grandparents, Jack and Rose Temple.

The four clans (eagle, raven, killer whale, and wolf) are carrying knowledge represented by the sun and moon at the center. Clan symbols visually represent the heritage and identities of the North Coast peoples and their families. Filling these symbols with individual actions and faces connects these powerful meanings and the feelings they produce with the real living people who embody them. The sun at the centre represents the understanding these people would like to give to others. The moon is a mirror that makes the audience a part of the mural and asks viewers to think about their own connections to the people represented. For the First Nations community of Prince Rupert, the mural is a powerful reminder of very important moments of happiness in their lives. For outside audiences, the artists and subjects hope the mural acknowledges the connections between contemporary identities, cultural meanings, and actions of First Nations Peoples. Instead of people of the past, the youth and community would like to be honoured as the people they are and will become.

Over six hundred pictures of approximately 80 community members are included in the mural. The majority of the pictures were produced by sumaxs of Prince Rupert over the last four years. After it is displayed in Vancouver, the mural will return to find a permanent home at the Friendship House of Prince Rupert.

Jennifer Wolowic’s work explores, through the experiences of Nisga’a and Tsimshian sumaxs in Prince Rupert, how visually based technologies such as regalia, Facebook, cell phones, photographs, and video unite modern Indigenous peoples across distance. She also examines how her own presence, as a non-indigenous researcher and ally who records and circulates representations with still images, video cameras, and text participates in the community. Jennifer uses ideas of affect to think about how images and experience influence human behaviors at emotional levels in order to explore how producing contemporary representations of urban indigenous youth can be used fight racism and violence.

Visit the Sumaxs Affect site for more on the Project and Jennifer Wolowic.

Green College is a graduate residential college at UBC, with a mandate to promote advanced interdisciplinary inquiry. The college offers public lectures, events and performances for free to the UBC and wider local community. View their full calendar of events.