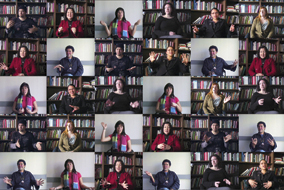 Dara Kelly remembers the day when a fellow student asked why aboriginal people were so “screwed up” in a class discussion.

To Kelly, one of seven UBC undergrads who speak candidly in a new documentary that explores race and aboriginality in the classroom, the comment felt like a slap in the face.

“I was speechless and totally disappointed and really hurt,” says Kelly, a member of the Fraser Valley Leq’a:mel First Nation. On film, she questions why no one, including herself, spoke up to counteract the statement. “Are you talking about me and my family?” she wish she had asked.

What I Learned in Class Today: Aboriginal Issues in the Classroom, directed by recent Faculty of Arts graduates Karrmen Crey and Amy Perreault, grew out of a directed-studies project in UBC’s First Nations Studies Program (FNSP), which covers everything from Aboriginal art history to land claims.

By addressing how curriculum deals with questions of aboriginality, and the way discussions around race in general play out in class, the filmmakers hope to draw a wide audience of educators and academics.

The 20-minute film, which will screen June 2 and 7 at the 2008 Congress of the Humanities and Social Sciences hosted at UBC, suggests ways teachers and students can begin to build a more sensitive and fruitful dialogue on these issues.

“We’ve also seen how profoundly affected people have been when watching the film,” says Crey, a Sto:lo First Nation member from the Cheam Band. “You read a report, you can look at statistics, but actually being faced with students who are experiencing these things is pretty powerful.”

Crey and Perreault, who is Métis, are expanding the project to include support materials for post-secondary instructors, administrators, and students. They are also in the process of interviewing instructors and administrators about their experiences dealing with these difficult classroom situations.

In the film, another Aboriginal student talks about the experience of regularly being put on the spot to lead class discussions. She says the responsibility of constantly being turned to for an “aboriginal view” is a double-edged sword.

UBC professor and FNSP director Linc Kesler says while research tends to look at educational barriers at the institutional level, no one had looked into it at the classroom level.

Race is an anxiety-inducing topic for many educators, he says. “The reality, of course, is that as professors almost none of us have received any training in how to work with those kinds of discussions.”

One of the documentary’s main goals, Kesler says, is to make talk constructive and to create conversations around race where everyone feels engaged.

What I Learned in Class Today screens June 2 at the Irving K. Barber Learning Centre’s Victoria Lecture Theatre and June 7 in Buchanan A204. Both screenings will be followed by a discussion.

To see the film and training materials, visit www.whatilearnedinclasstoday.com.