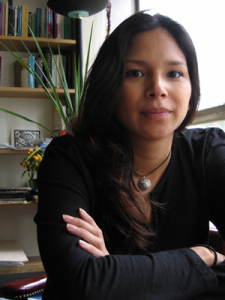 As a child, Charlene Smoke often played school or teacher. In a recent interview, she explains that despite not graduating from high school, she “dreamed of being one of the few in my family to get an education.” With a year left in her Bachelor of Arts program in First Nations Studies, she is close to accomplishing her goal. Over the course of her studies at UBC, Smoke, who has already completed an Associate of Arts degree in Aboriginal Studies from Langara College, developed an interest in working with Aboriginal youth.

Smoke’s own adolescence was far from ordinary. At the age of fourteen, she was approached by a modeling agent. The agent was so impressed that she offered to pay for Smoke’s photos and transportation between shoots—-anything to get the young woman’s career started. Smoke continued her high schooling off-and-on for several years before quitting it completely at the age of sixteen to pursue modeling full-time in Manhattan. She worked as an international fashion model until the age of twenty-one, when she left the industry to return to her family in British Columbia.

“I missed home,” she explains. “I felt a sense of responsibility [to complete my education].”

Not certain about what she wanted to do, Smoke enrolled in Langara College as a mature student. She considered taking courses that would lead to an elementary or secondary school education certificate. During a visit with the Coordinator of First Nations Education at Langara, Smoke learned about Langara’s Aboriginal Studies Program and was immediately intrigued. She was particularly interested in the new theoretical approaches to culture and history suggested by the program. After transferring to UBC’s First Nations Studies Program, Smoke has continued to develop her research and writing skills and credits the program for improving her academic confidence.

Smoke’s research practicum project for FNSP 400 brought together her interest in media with her interest in reaching aboriginal youth, particularly young women. She worked with Redwire magazine, a youth-run Native media and arts quarterly. Smoke worked with two focus groups of female Aboriginal teens on the topic of media representations of fashion and the result on young native women’s self-esteem. She found herself “impressed by their maturity level” and their level of self-confidence. “Their priorities were in different places,” Smoke explains. The two groups of women, aged fifteen to eighteen, were generally from under-privileged backgrounds. They had a keen sense of self-awareness and were “less affected than you’d think” by the general representation of women in fashion media. Smoke was amazed at their willingness to delve deeply into questions about self-esteem. “The hardest part was narrowing down the questions,” she explains. “But I found that what I had to do was basically lead them into an area and let them do the talking.”

Although she faced some organizational challenges in the process, Smoke’s persistent work with the focus groups led to her penning an article for Redwire. Smoke advises new practicum students to keep their minds open when starting work with organizations—-while some organizations will provide lots of guidance and support for your project, other organizations will not be able to provide you with the direction you need. Be proactive and do what you need to do in order to get your work done. The challenges are, she explains, like real-life challenges. “It was a job,” she says. She developed a schedule for her work and used it to keep her on-track. Ultimately, Smoke concludes, the practicum is a self-directed project and it is important for students to feel passionate and self-motivated about their work.

While Smoke is satisfied with what she learned during her practicum, she does not see work as a research consultant in her future. Instead, she would like to persist with her schooling and pursue a Masters degree. Eventually, she would like to teach First Nations Studies to youth and adults, to native and non-native people. It appears that her childhood dreams are not far off the mark.