Safeguarding the Keys to Knowledge 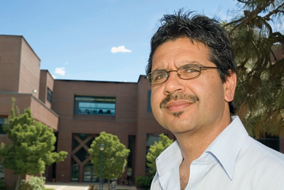 If indigenous languages disappear so, too, will invaluable knowledge about our environment and sustainable ways of life, warns Lester-Irrabina Rigney, a visiting research fellow with UBC’s Department of Education Studies.

“The world’s indigenous languages are in crisis,” Rigney points out. “The way things are going, only a few hundred languages amongst the world’s 6,000 or so look like surviving in the long term. The rate of extinction of languages and cultures far exceeds that of fauna and flora.”

An Aboriginal scholar from South Australia’s Narungga Nation, Rigney is an associate professor with the Yunggorendi First Nations Centre for Higher Education and Research at Australia’s Flinders University. He holds a PhD in indigenous research, and is collaborating with the newly formed Indigenous Education Research Institute of Canada located at UBC. The institute, he explains, is developing a Pacific consortium on research into indigenous education in partnership with researchers in Australia, Hawaii, New Zealand and Indonesia.

Rigney has observed the threatened state of these languages in all the colonized areas of the world he has visited, including Canada.

“What astounds me is that in Canada there’s lots of emphasis on saving wildlife, rivers, and so on, yet you have indigenous languages that are not found anywhere else in the world,” he says. “They are not official languages in Canada, so they suffer a range of fates. Once they go to sleep, it’s very hard to awaken them.”

He argues that when an indigenous language is firmly supported, it creates a stronger sense of place for its people, and allows services to be provided in ways that make people feel comfortable. That can lead to better education and greater development opportunities. For all these reasons, he says, “we need more numeracy and literacy in these languages.”

Improving how research is conducted is important in the quest to better understand and help preserve First languages and cultures. Historically, researchers haven’t done a good job, Rigney notes.

“Over the first 150 years of Australian — and Canadian — colonization, indigenous peoples were viewed as static, as if they were statues behind glass,” he says. “In the past, research was done pretty inappropriately.”

Communities were studied without engaging or even showing much consideration for the people who were studied. In what Rigney describes as being akin to “intellectual gymnastics,” today’s researchers must be aware of a host of complex issues, legalities and ethics, and employ research techniques that are sensitive and productive for everyone.

He views programs like the UBC Okanagan Summer Institute as an important part of the solution. Only in the last decade or so, with a small but growing number of indigenous students earning advanced degrees, have indigenous people around the world become involved in researching their own communities, he observes.

A history of invasive research in indigenous communities remains sharp in people’s minds, yet positive changes are taking place, Rigney suggests. “Research is still a dirty word for some. But now more and more people want to be a part of research — they see that it’s a part of building the future.”

“It’s exciting — it has taken a long time to get indigenous researchers and scholars, and there are now some extraordinary researchers, from ethnobotany to speech pathology. I’m fortunate to be working with some of Canada’s most skilled PhDs, and they will all make a difference.”
UBC Reports | Vol. 53 | No. 7 | Jul 5, 2007
Indigenous scholar says preserving languages keeps cultural knowledge alive