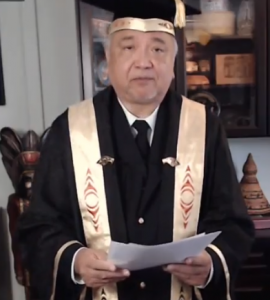 For the first time, the installation ceremony, like other events held during this time of COVID-19 precautions, was a virtual affair.

In another first, the President and the new Chancellor were adorned in Indigenous-themed academic regalia.

The stunning regalia was designed by Chrystal Sparrow, a xʷəməθkʷəy̓əm artist who previously designed an academic stole for past president Stephen Toope. The new regalia acknowledges the relationship between UBC and the xʷməθkʷəy̓əm and Syilx Okanagan peoples. 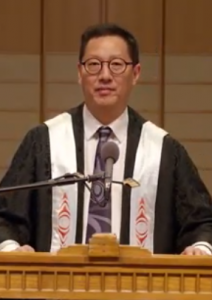 The Chancellor and the President will wear the regalia during academic ceremonies.

But the most notable aspect of the event was, of course, the installation of the Honourable Steven Point (xwĕ lī qwĕl tĕl) of the Skowkale First Nation as Chancellor, the first ever Indigenous person to be appointed to this highly regarded role.

Chancellor Point is a double alumnus of UBC and has retained close ties with the university after receiving his Bachelor of Laws in 1985. He served as director of the First Nations Legal Studies program at the Peter A. Allard School of Law from 1991–1994 and was awarded an honorary Doctor of Laws degree in 2013 for his exceptional commitment in the field of law, legal and Aboriginal education and his leadership in the Indigenous community.

“I look forward to returning to my alma mater and working alongside students, faculty, academic leaders and the broader community to advance the university’s vision,” Chancellor Point said prior to his installation.

“On behalf of FNHL staff and the Longhouse community, I welcome the installation of the Honorable Steven Point as Chancellor, UBC’s first ever Indigenous appointment to the role,” Dr. Margaret Moss, director of the First Nations House of Learning said.

“Chancellor Point brings to the university a unique set of experiences, perspectives and expertise which are poised to help fulfill the stated vision and mission of the newly launched Indigenous Strategic Plan.

“For me, the ceremony was especially moving and inspiring, as it likely was for those Indigenous students, staff, faculty and alumni who saw it.”