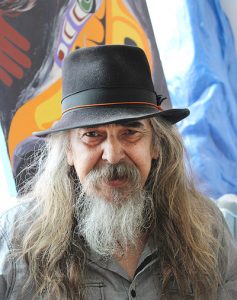 March 28, 2017 – The staff at the First Nations House of Learning acknowledges with great sadness the passing of their dear friend Beau Dick, Kwakwaka’wakw hereditary chief, renowned master carver, and for the past four years resident artist at UBC.

“We’re all tremendously saddened by Beau’s passing, and extend our deepest condolences to his family, friends and nation,” said Debra Martel, associate director of the First Nations House of Learning. 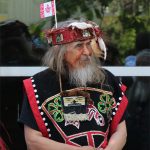 Beau Dick at the launch of Awalaskenis II.

During his time at UBC, Beau was a mainstay presence at the Aboriginal student lunches, held weekly at the Longhouse’s Sty-Wet-Tan Great Hall, where often he generously shared a song or story, captivating everyone with his vivid and sincere expressions, and ready smile.

He is also remembered for hosting at the Longhouse, in 2014, the beginning of Awalaskenis II, the second leg of a traditional shaming ceremony that involved trekking with supporters to Parliament Hill in Ottawa to break copper to symbolize the Crown’s broken relationship with Indigenous peoples and the ongoing harm being done to the environment. It also served as a challenge to the government to mend these relations. 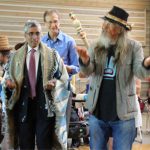 Prior to this event, Beau participated along with others in a welcome ceremony for Arvind Gupta, then the new UBC president.

Earlier that year, he hosted a potlatch at the Longhouse, which involved name giving, feasting, and dancing with sacred, seldom seen masks.

“He touched many students, staff and faculty here at UBC,” said Debra Martel. “His songs, stories and conversations always underscored his message of unity, community and a wish for everyone to respect and understand each other. He will be deeply missed.”