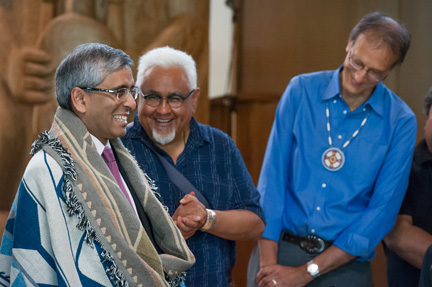 Professor Gupta was wrapped in a blanket designed with traditional water-based motifs by Musqueam knowledge-keeper Debra Sparrow. White eagle down was then sprinkled over the president and his chin was marked with red ochre.

In an interview afterward with Elder Pointe, he explained that the blanket’s design is meant to signify UBC’s relationship with water, which like the Musqueam is situated on the shores of the Salish Sea. Moreover, he said Coast Salish people view water as good medicine. “To the Coast Salish people, water is the biggest source of sustenance.”

He explained how eagle down represents the bird’s extraordinary strength, vision, and hunting prowess, and that by sprinkling it over him this was meant to acknowledge Prof. Gupta’s leadership role at the university.

“It’s a big honor,” Elder Pointe said. “It doesn’t happen all the time.” He added that this was the first time a UBC president had been honored in this way.

The red ochre symbolizes medicine from mother earth, he said, and this along with the blanket and the eagle down was meant to wrap the new president in “good medicine” on the first day of his new job.

To which, during the ceremony, Elder Pointe implored Prof. Gupta to “have fun” in his new role.

Prof. Gupta contributed to the ceremony with a prepared speech, which among other things recognized the Musqueam people, on whose traditional land the university is situated on.

“I am greatly honored by the gravity and generosity of this gesture,” Prof. Gupta said afterward. “I am also deeply grateful to the Musqueam people and delighted that this is my very first ceremony as President and Vice-Chancellor of UBC.”

He along with the First Nation dignitaries and many others participated in an adjoining Haida and Kwakwaka’wakw ceremony, which saw the launch of Beau Dick’s cross-country journey to Ottawa, where he is going to “break copper” as part of bringing government and public attention to coastal First Nations’ environmental concerns.