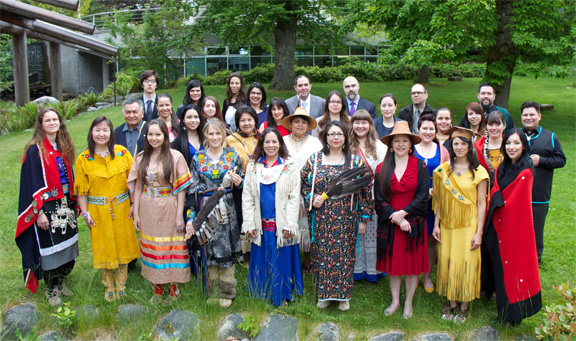 May 30, 2014 – On Saturday, May 24, 33 out of at least 139 UBC Aboriginal graduates from the 2013/14 year, including Dempsey Bob, acclaimed Tahltan-Tlingit artist, Officer of the Order of Canada, and recent UBC honorary degree recipient, walked through the graduation door at the First Nations Longhouse.

This ceremonial event saw them formally announced into the Longhouse by Dr. Linc Kesler, Director of the First Nations House of Learning, accompanied by the drum of Musqueam cultural ambassador, Victor Guerin, in recognition of their respective achievements and acquired status as graduates.

Elder Larry Grant, first in hən̓q̓əmin̓əm̓ and then English, welcomed everyone to Musqueam traditional territory and the day’s proceedings. Following this, Dr. Kesler spoke about the importance of Sty-Wet-Tan Hall, in particular the house-posts and artworks that adorn its interior and ceiling.

This year’s graduation celebration also included a special acknowledgement of UBC President Stephen Toope and Vice-Provost Anna Kindler, who will soon be leaving their posts. They were ceremoniously blanketed by both Musqueam and First Nations House of Learning representatives. 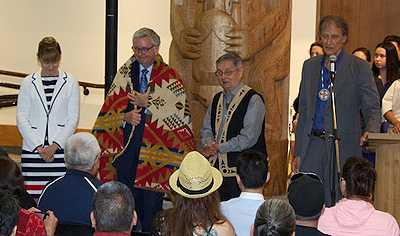 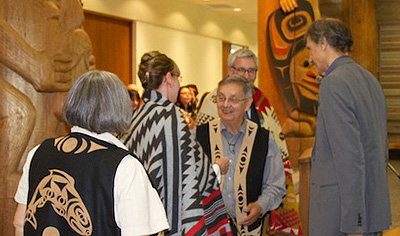 Dr. Kesler spoke of their notable contributions to UBC’s Aboriginal community, in particular Dr. Toope’s decision to prioritize the development of the university’s Aboriginal Strategic Plan soon after taking office and Dr. Kindler’s key role in having classes suspended on September 18, the first day of the Truth and Reconciliation Commission of Canada’s four-day event in Vancouver, in order to encourage students, faculty, and staff to learn more about the legacy of Canada’s Indian residential schools. 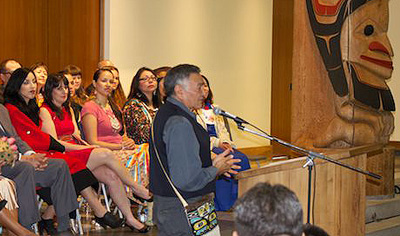 Dr. Dempsey Bob provided the day’s keynote address, where he took the opportunity to personally congratulate and address the graduates.

He said he looked upon their efforts to complete their studies as a “magnificent struggle,” later adding that because they knew how much stress they went through to do so, they would “have to make that meaningful now.”

He spoke about how walking through the Longhouse’s graduation door, which is only opened for this purpose, symbolized a new start for them.

“You’ve stepped into a new time in your life, a new beginning,” he said.

“What you have now is very precious,” he continued, regarding their achievements.

“But you have to use it to make it stronger, to make it grow. It’s not going to grow by itself. You have to be the one that makes it grow.

He told the graduates they were a “great example for our children” because they are part of turning the negative experience of Indian residential schools around.

He concluded by telling the graduates how “very proud” he was of them.

Read a transcript of the full address here. 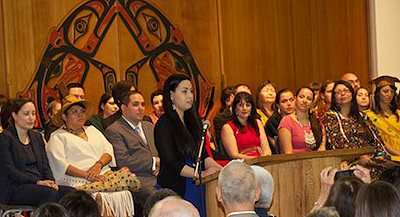 She told the gathering of mainly relatives and friends of the graduates how proud she was to be with her cohorts celebrating their accomplishments.

Then she went on to recall her first experiences at the university, the Longhouse in particular:

I remember my first day at the Longhouse, searching for somewhere I might fit in. I was worried that maybe this wouldn’t be the place for me. Maybe everyone would be smarter than me, older than me, more native than me. But the moment I stepped through those doors, all those worries went away and I knew this place I would soon call my home. I was greeted with smiles and the offer of food, the two things that seem readily available here.

Within my first hour, I met fellow students, administration, elders, and teachers, and made connections that still stand strong to this day. I knew then that there was no such thing as finding the right way to belong. I just needed to be me and I would be loved.

I look back on that confused 18-year old girl and I thank her. I thank her for opening her heart to the people she met and the opportunities that were placed before her. Thanks to her, I’m now leaving here a strong 22-year old woman who is confident as I take first steps on my new journey.

My time here at UBC has brought me friends and family and gave me a chance to connect back to my amazing home community and provided me with memories that will last in my heart for a lifetime.

She also spoke about her long journey toward the Longhouse graduation ceremony:

Every year, thousands of students graduate here at the university after many days of classes and nights of studying. They all pile into the Chan Centre and celebrate their achievement. But for me, something about this day, here and now, seems a little more special. This is the day I looked forward to since day one.

Feast and smiles end the day

The celebration ended with a feast of salmon, fresh salads, bannock, and cake, and with graduates alongside family and friends getting their pictures taken by a photographer hired by the First Nations House of Learning as a congratulatory gift to them.

Correction: A previous version of this story incorrectly indicated that there were a total of 139 Aboriginal graduates for the 2013/14 year. This number represents the minimum number of Aboriginal graduate students rather than the total, which hadn’t been determined when this story was published.